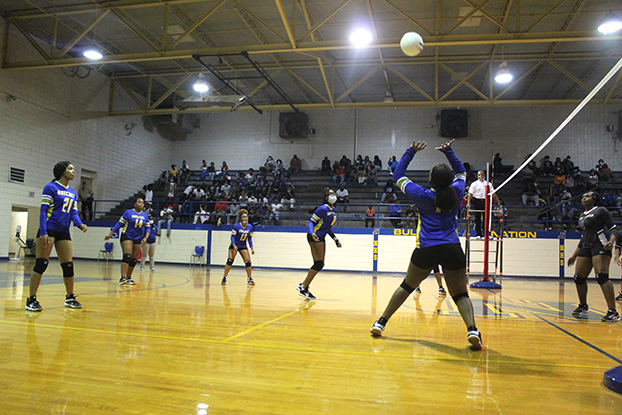 NATCHEZ — Despite a late start to the season and not playing in a specific region in MHSAA Class 5A, Natchez High School’s inaugural girls’ volleyball season in 2021 went well all things considered.

And that is how Jamal McCullen, who was named head coach of this new sport at Natchez High a year ago, viewed it. The Lady Bulldogs’ volleyball team went on to win two games out of the seven it ended up playing.

“I thought it went well considering how late we got the team together. The girls played well considering the short turnaround from tryouts to when the season started,” McCullen said. “We weren’t district-eligible in Class 5A like other sports, so we weren’t able to be in the playoffs.”

And while Natchez High’s junior varsity and varsity girls’ volleyball teams will have more than twice as many games on the schedule this year, the Lady Bulldogs will not be region-eligible in Class 5A.

Even though they will not be part of the postseason in Year No. 2, McCullen said he is “enthusiastic and excited” about the upcoming season. They will have a full summer of practice to get ready for the season, and he is excited about the number of girls on the roster this season.

“We had a nice turnout for the tryouts. About half of the girls from last year are returning and half of them are new players who have never played the sport,” McCullen said. “Volleyball is not a popular sport here, but the new girls want to play the sport. The girls coming out are really excited. I’m expecting us to be better this year.”

McCullen said this year’s Natchez High volleyball squad is 10 times better than last year’s squad at this time. He added that last year’s team didn’t have a system and that everyone involved were learning the basics of the sport. It’s a lot different a year later.

“This year, we were able to train and teach specialized roles. The girls were able to get more reps in so their skills are better,” McCullen said. “I’m really excited for this year. It’s night and day from last year. I have about 30 girls, JV and varsity. Fifteen that played last year and 15 are new girls. The seniors that played last year, they’re sharing their knowledge with the new girls. This year we have a whole summer of practice so we can get in more reps and the girls can progress.”

Of the 14 seniors on this year’s team, McCullen said 10 of them played last year and having that playing experience from a year ago could very well help the Lady Bulldogs win more games this season. He added that he expects the seniors to be leaders.

“They have the skill set to make us competitive. They lead by example,” he said. “Last year was a learning experience. We were independent. Enthusiasm was high. Our goals were high. But expectations were tempered. We had a lot of girls who had never played (volleyball) before.”

McCullen said that he wanted to establish a culture and an appreciation for the sport. He noted that as the season progressed, the Lady Bulldogs got better and better. The first win of the 2021 season was actually by forfeit because its opponent, South Pike High School, had at least one case of COVID-19 close to the actual game date.

Their second win was over Port Gibson High School and that was won by both the JV and varsity squads.

He said that towards the end of the season, he tried to schedule more teams but other teams didn’t want to play Natchez High because they thought it was a “meaningless game” for them and they would rather play region games.

“But with a head start to this season, we have about 18 games scheduled this year. Two games a week from early August to early October. A home game and an away game each week,” McCullen said. “We have one open week so as the season progresses, we may be able to squeeze in another game or two. We want game experience. The girls want to get better. There’s no real substitute for real games. We can practice and scrimmage (all we want), but we want to play real games.”

Natchez High’s girls’ volleyball season starts on Tuesday, Aug. 9 at Franklin County with the JV game at 5 p.m., followed by the varsity game at 6 p.m. Its home opener will be on Thursday, Aug. 11 against McComb. The JV game will be at 5 p.m. and the varsity game will follow at 6 p.m. As of now, all home games are scheduled to take place at the Morgantown Elementary School gym.