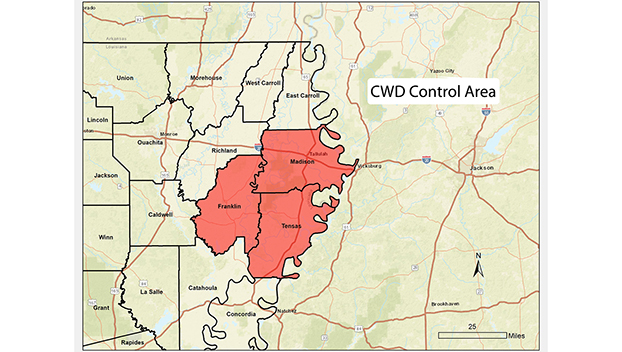 Photo Courtesy of the Louisiana Department of Wildlife and Fisheries.

BATON ROUGE — The Louisiana Department of Wildlife and Fisheries (LDWF) heard a final round of public comments on a notice of intent that bans supplemental feeding and cervid carcass export from the Chronic Wasting Disease (CWD) control area, which includes Franklin, Madison and Tensas parishes. This action is part of LDWF’s CWD Management Plan.

LDWF instituted its CWD Management Plan in those three parishes in response to a CWD positive detection on Jan. 28 of an adult buck harvested in Tensas Parish. CWD is a disease that is always fatal to deer and can not currently be eradicated. Tensas Parish’s buck was the first deer with CWD recorded in the state, making Louisiana the 28th state to discover the disease, now occurring in 29 states.

The Louisiana Wildlife and Fisheries Commission (LWFC) approved the NOI during its April meeting and opened the NOI for public comment. The Notice of Intent reads:

LDWF Deer Program Manager Johnathan Bordelon said the commission secretary signed the notice of intent and passed it on to the Senate and House Committees. This action continues a process but does not result in a final rule as of right now. The Natural Resource Committee has 30 days to review and consider the NOI. If the rules are approved by August 10, it would go into effect by August 20.

He said during the meeting their CWD Management Plan began 20 years ago and has been developed based on what is scientifically the best practice. They are now on their fourth plan. When the positive was discovered, Louisiana was able to react quickly.

“You have one shot at the start. If it gets out then you evolve into bigger problems which require drastic solutions and tougher challenges,” Bordelon said. “Thankfully our response was based on detection and not on the number of positives.”

Commissioner William Joe McPherson said he was happy they were prepared for CWD.

“I think we acted appropriately. How dumb would it have been to wait until you have 16 positives,” McPherson said. “We have a chance to contain it.”

The positive deer’s DNA results were not returned before Thursday’s commission Meeting. Bordelon said Friday they are still awaiting the results from a lab at Texas A&M University.

DNA results from the deer would help determine where the buck originated. Texas A&M has a bank of samples collected throughout the southeast, and researchers could determine if a deer is local or if it has a northern lineage.

“If it comes back as a northern lineage, it would be determined it was a pen escape,” Bordelon said. “We can’t discern exactly where a deer has lived because you will always have a mixture. You are just going to get a regional understanding. It is possible the buck swam across the river from Mississippi. We have a deer right now in Madison Parish that was collared in Mississippi.”

Concluding if it was a pen escape or if the CWD-positive deer was regional will help the LDWF understand the likelihood of disease spread and where it may have become infected. The buck was symptomatic and immobile at the time of harvest.

He said the hunter was able to walk up to the deer and put it down, a sign it was well into the later stages of Chronic Wasting Disease. There has likely been some environmental contamination as the buck would have shed the infectious prions that cause CWD.

Louisiana will start to piece together data after years and years of surveillance to determine if the Tensas Parish positive spread to any other deer. They could find more positives, or they may not find any.

“Hopefully, we don’t find any more that would be the best case. We might get a lot of criticism for overreacting, but I much rather be criticized for overreacting to this disease than not,” Bordelon said. “Southwest Tennessee is a hotbed for CWD, and it is starting to spread in Mississippi. Hopefully, it plays out differently for us…People often focus on the number of positives. The most important number is how many deer have been sampled. It is still too soon. All we know is it is hard to detect it without samples.”

Farmers apply for and receive tags from the Louisiana Department of Wildlife and Fisheries and depend on LSU’s AgCenter to assess the crop damage. Any deer harvested with those tags must have the meat donated to the Hunters for the Hungry and samples provided to the LDWF for CWD testing.

Bordelon said the problem with deprivation permits is the only issue about 15 to 30 permits a year. In Franklin Parish last year, they issued three permits, only one farmer had two deer harvested, and the other two did not get any.

He said the fall is coming, and that is when they will receive the best sampling.

“We know this fall thousands of deer will be killed,” Bordelon said. “Last year, Tensas Parish alone had 3,500 reported harvests, and there is a chance there were some more harvested. There will be an opportunity to get plenty of samples this fall.”