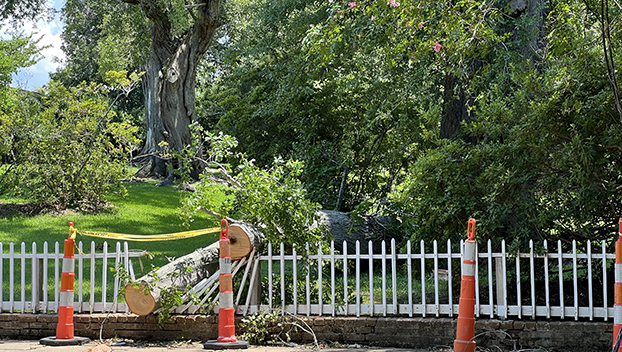 NATCHEZ — The damage caused by a tree that fell from The Elms’ front lawn onto Martin Luther King Jr. Road on Saturday afternoon resulted in power loss for dozens of area residents and a few businesses well into the evening Saturday.

The damage was so extensive that power loss to 41 residential and commercial Entergy customers continued for over seven hours.

The National Weather Service previously issued a heat warning for the area lasting throughout the day Saturday, stating the heat index would reach as high as 115 degrees. The weather service cautioned residents to stay out of the sun in an air-conditioned room as much as possible, which wasn’t an option for the dozens who lost their electricity. This was before a severe thunderstorm caused widespread damage to power lines throughout Adams County early Sunday.

Guy Bass, who co-owns the Malt Shop on Homochitto Street, said the loss of power cost him approximately $ 2,000 worth of lost business and spoiled food.

“It cost us a lot,” he said. “We closed at around 1 p.m. and didn’t reopen until (Monday). We lost some things in the freezer that we had to throw out and the Chevron was closed across the street. They locked up and reopened Sunday.”

Bass said he thinks Entergy had to repair transformer boxes which took up a lot of time.

On Monday, Tim Runnels, an Entergy spokesperson, said he didn’t have any information about that particular power outage.

The tree blocked both lanes of traffic on Martin Luther King Jr. Road.

Entergy and Natchez Public Works arrived on the scene minutes later to help clear the debris.