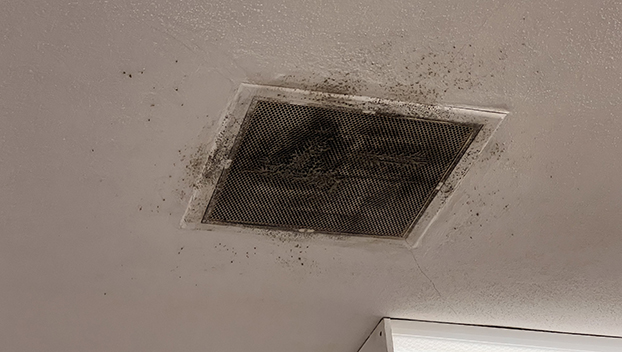 Mold grows on a ceiling vent in the Adams County E-911 dispatch office.

NATCHEZ — Natchez Police Chief Joseph Daughtry presented a plan to the Natchez Mayor and Board of Aldermen today, which may solve the issue of the current poor working conditions faced now by E-911 dispatchers, as well as save the city and county taxpayers dollars.

The city and county combined its law enforcement and fire emergency dispatching services in April 2017. The dispatch center is located in the basement of the Adams County Jail, and dispatchers have suffered through untenable conditions there, including rain and raw sewage leakages coming through ceiling tiles and down walls from above and spreading mold and mildew.

Those working conditions have made recruiting and retaining dispatchers difficult, as well as presenting a potential danger to employees, Annette Fells, dispatch manager, has said.

The Adams County Board of Supervisors, which acts as the managing agency for the combined center, asked Fells to find a suitable location to move the dispatch center. She has proposed purchasing a building in the north part of the city.

After determining the costs of the purchase of the building, renovations and costs of moving equipment, the county’s attorney, Scott Slover, sent a new budget to the city with what costs would be after a move to the new building.

The county’s budget for the dispatch center would cost taxpayers $1,081,285 for the first year and $817,296 for subsequent years, which would be split between the city and county.

Natchez Mayor Dan Gibson asked Daughtry to look at the county’s new budget and determine if he saw a better way.

Daughtry said costs could be reduced significantly by moving the dispatch center into the existing Natchez Police Department.

His proposal includes making about $125,000 in renovations to accommodate dispatchers, as well as leasing new, modern dispatch equipment at a cost of $50,000 per year for seven years to replace what he said is current, antiquated dispatch equipment. Those amounts would be split between the city and county.

“I was hired to be a good steward of taxpayer dollars,” Daughtry said.

Daughtry said he and Natchez Fire Chief Robert Arrington and City Clerk Meghan McKenzie worked together to put together the plan and to make certain benefits, payroll taxes and other expenses were included.

“We are trying to save the taxpayers money,” Daughtry said.

Gibson thanked Daughtry, Arrington and McKenzie for their work on the proposal, which must be presented to the county for its consideration.

“This shows the city can definitely do this at a savings,” Gibson said. “The big savings is we can move this into an existing building, rather than having to buy a new building and go to the expense of equipping it, putting all the security in place. One of the things I find really good about this proposal is it continues, as we have wanted all along, the partnership. It has not been my desire to see that end. It is important for the city and county to continue to work together and at a savings for the taxpayers.”