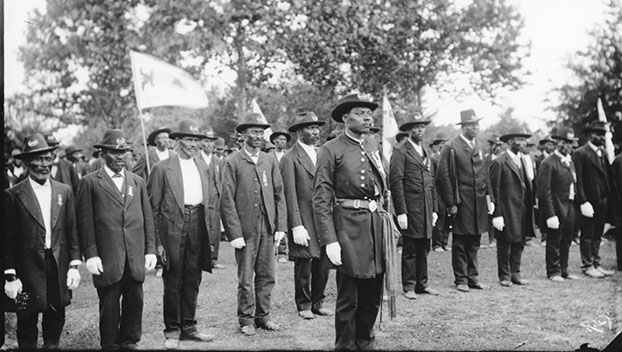 This photograph of the Grand Army of the Republic (GAR) dates to a Memorial Day (May 30) in the late 1880s or early 1890s. The hats of the men are adorned with wreaths and the letters GAR within the wreath. One identification says the photograph may have been taken in the Bluff Park. However, newspaper accounts of the activities of the GAR on Memorial Day indicate that it was more likely taken at the National Cemetery. The photographer was Livingston Stewart. (Photo courtesy William E. Stewart Collection, Historic Natchez Foundation.)

NATCHEZ — Juneteenth, now a national holiday, celebrates the arrival of Major Gen. Gordon Granger of the Union Army in 1865 to Galveston, Texas, along with federal troops, who spread the word to enslaved people that they were free.

However, word reached enslaved people in Natchez on July 13, 1863, said Ser Seshsh Ab Heter-Clifford M. Boxley, a Natchez native and historian who is responsible for the recognition of the Forks of the Road chattel slavery site as a National Park Service Park here, as well as the push to tell the story of life for Blacks in Natchez before, during and after the Civil War. 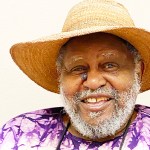 He tells the story, based on his years of extensive research, of the many contributions of those of African descendants to the success of the overthrow of the Confederates and the end of the Civil War.

“Self-emancipated enslaved people of African descent served as sailors, spies, guides — just about every capacity needed,” Boxley said. “That’s why I am against a monument honoring the U.S Colored Troops that would include names on it.

“Don’t get me wrong. I am all for a monument honoring the U.S. Colored Troops, but that monument should also honor the civilians, the sailors, and the infantrymen, all of the people who were involved in helping defeat the Confederates. It should be something more generic, something that includes imagery and honors all of these people.”

If names are included on the planned monument, inevitably, some involved will not be included and the monument will not serve its purpose, Boxley said. Indeed, records do not include all of the names of those who signed up and served the Union Army here, he said.

Fighting for their freedom

Gen. U.S. Grant, who was in charge of the Union Army, was given the assignment from President Abraham Lincoln to take control of the Mississippi River, Boxley said.

Taking Vicksburg was the key to controlling the Mississippi River. Thousands of self-emancipated enslaved people flocked to the locations of the Union Army and Emancipation Proclamation Freedom. During the early formation of the U.S. Colored Troops in the campaign for Vicksburg, six or seven regiments of Africans were formed.

“On June 7, 1863, in the battle of Milliken Bend, Louisiana, runaway slaves enlisted as Union soldiers are given weapons, many of which are not workable, and were forced into hand-to-hand combat. They were organized into the First and Third Mississippi Volunteer Regiments, the Eight, Ninth and Eleventh Louisiana African Corps, which included enslaved people from all over.”

It was in this battle, Boxley said, that former enslaved Blacks proved they could fight and more importantly would fight their former masters.

“These were elite Confederate troops from Texas, who in the end withdrew while being bombarded by a Union gunboat. Historians says the Black troops proved their mettle. They proved they could fight and did fight. It was one of the most vicious hand-to-hand battles of the Civil War,” he said.

Boxley said at the time, Grant had exercised several efforts to get at Vicksburg through Mississippi backwaters and all had failed. He was looking for a way to land on the Mississippi side of river and go by land to attack the Confederates at Vicksburg, but had no success. That is, until an old enslaved man, who Boxley portrays in his history presentations, spoke up and told Grant and his troops a way they could cross the river from Louisiana from Hard Time, Louisiana, to Bruinsberg, Mississippi, where there were good roads to travel by land to Vicksburg. Using the old man’s guidance, the Union Army fought its way through Port Gibson, Raymond, Jackson and Champion Hill to finally take Vicksburg, he said.

“That man deserves to be honored,” he said. While the old man’s name has faded with history, Grant called him “a contraband hero.”

The Union Army arrived by river and took control of Natchez on July 13, 1863.

“You’ve seen what freedom is or was to enslaved people and also for Natchez at the top of its wealth, cotton kingdom. With the Union Army occupying Natchez, this meant the end of selling enslaved people at the Forks of the Road in Natchez,” Boxley said.

“They also had a hospital at Forks of the Road, where Bishop Elder of St. Mary Cathedral made trips to baptize the sick and dying, he wrote in his diary,” he said. “You have the 58th infantry and whites and Blacks stationed out at Monmouth Plantation. They used for barracks the places that had housed enslaved people.

“A little later, we know from a document from a Missouri newspaper, permission was given to the U.S. Colored Troops to tear down those buildings at Forks of the Road to build barracks below the bluff, and such an enthusiastic labor action that overnight, this place that held enslaves now Union soldiers that had been possibly sold there, was dismantled overnight. This is what was or is Julyteenth,”

“I am adamant about participating and have a long history of celebrating Juneteenth, especially in California, where we called it the African Maafa, which is a Swahili term for great destruction. That goes back to when the Arabs and Europeans invaded Africa. Juneteenth signals the end of that long, horror of Atlantic enslavement happening.

“Juneteenth isn’t just a party of red soda pop, watermelons, sack races and barbecue sauce. That’s not the essence of Juneteenth. That’s the party and celebration. In terms of signaling the end, it was not the end of slavery. You don’t get the end of chattel slavery until December 1865 with the passage of the 13th amendment,” Boxley said.

“It ought to be celebrated and commemorated. School educators should teach about this. The Colored Troops monument people ought to be sharing this with the community here. The tourism agency and the Mississippi Department of Archives and History should be telling the story of what freedom meant to Natchez, when the Union Army arrived,” he said.

“I am adamantly supportive of the monument and honoring the Black troops, but honor all of them, not some of them,” Boxley said.

“There are plenty of gaps. The National Black Civil War museum missed the U.S. Colored Troops who served in white units,” he said, mentioning the runaway enslaved people from Saragossa Plantation here who ran all the way to Baton Rouge and to New Orleans to join the Union Navy.

“How will they be recognized? Is it honorable not to recognize them? That’s why this monument should be more generic, rather than based on genealogy.”