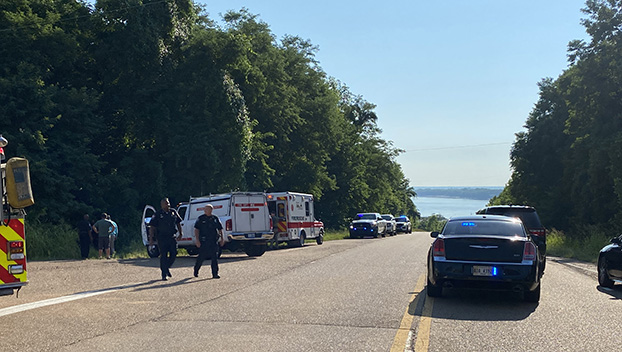 Natchez Police and Adams County Sheriff's Deputies responded to the scene of a fatal accident on Government Fleet Road on Tuesday at about 5:30 p.m. The driver was reportedly fleeing the scene of an accident that occurred on the eastbound Mississippi River Bridge. Here, Natchez Police Chief Joseph Daughtry, left, walks with another officer after surveying the accident scene. (Jan Griffey | The Natchez Democrat)

NATCHEZ — The driver killed after running off Government Fleet Road in Adams County early evening on Tuesday has been identified as 17-year-old Cameron Smith.

Adams County Sheriff Travis Patten released Smith’s name after his family had been notified about his death.

“This was a good kid. A good kid who made a mistake,” Patten said.

Smith was apparently on his way to work at the Pizza Hut, he said.

Patten said Smith allegedly hit a car from behind after crossing the eastbound Mississippi River Bridge. That car pulled over, and Smith appeared to be doing the same. However, he went around the vehicle he hit instead and turned onto Government Fleet Road.

“The other driver did not chase him, but did follow him in an attempt to get a license plate number,” Patten said. “The caller reported seeing a cloud of dust where Smith went off the road.”

Deputies located Smith, whose car hit a tree when it left the roadway and went into a wooded area, a short time later.

“It is a very unfortunate thing for anyone to feel the need to flee a scene. Stay and face whatever consequences are coming to you. Nothing is worth losing your life over,” Patten said. “My heart is with this young man’s family and friends. This was a good young man who made a tragic mistake.”

Natchez Police Chief Joseph Daughtry said he has received calls from parents whose children are very upset because they were friends with Smith.

“They asked me what would have happened to him. I told them he probably would have gotten a ticket,” Daughtry said.

“When does it end? Kids have to stop making these poor decisions. I concur with the Sheriff. Please, let’s deal with the consequences. What’s the worst that can happen? It’s not worth losing your life. When you hit a tree, a tree doesn’t give,” Daughtry said. “My heart goes out to the family of this young man and his friends.”