VIDALIA, La. — Concordia Parish Sheriff’s deputies arrested a 57-year-old Woodville man on Monday for attempting to “meet up” with a minor inside a store bathroom to have sex with them, authorities said. 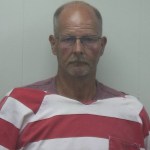 Denny Rex Boyd, 57, from Woodville, was arrested by Concordia Parish Sheriff’s Office on Monday for computer-aided solicitation of a minor and indecent behavior with juveniles. All persons are presumed innocent until proven guilty. (Submitted photo)

While deputies were still working to identify Boyd, he allegedly requested to “meet up” with the child. Deputies said they located Boyd on Monday where the suspect said he would be and immediately took him into custody and identified him as the man who was communicating with the child.