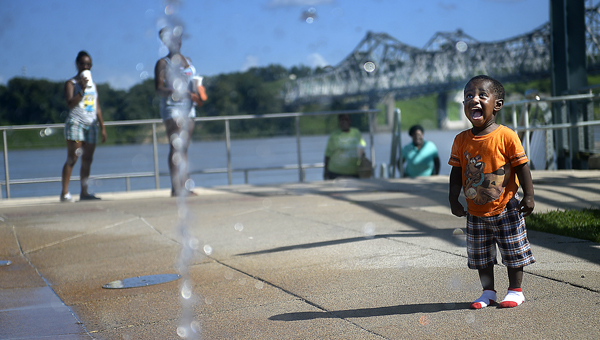 Dabriyon Bailey, 20 months, reacts to seeing the water jets rise from the ground at the spray park on the Vidalia Riverfront in 2015. Officials plan for a splash pad and more at Polk Park next to the Vidalia Municipal Complex. (File photo | The Natchez Democrat)

VIDALIA, La. — Vidalia Mayor Buz Craft announced during a Tuesday meeting that the town is “fixing to make a splash—literally.”

Officials plan to make major updates and complete Polk Park, which is located in the area near the Vidalia fishing pond and adjacent to the municipal complex.

Tentatively, this plan includes a splash pad as well as three to four pavilions equipped with water and power, four playground areas, a skate park, walking and bicycle trails and a disk golf course, Craft said.

The four playground areas would each serve different purposes, one for younger children, one for older children, one that is accessible for the handicapped and finally an exercise area for senior adults.

The pavilions would have space for large events such as birthday parties or family reunions, he said. Sufficient parking and restroom areas would also be included. The park area adjacent to the community garden could provide an alternative location for a weekly farmer’s market the town has from 8 a.m. until noon Wednesdays on Oak Street, he said.

The initial rendering for the project was done back in 2011 and since has been modified to best fit current community interests. Craft said the previous administration agreed to allocate excess funds from the town’s hydro fund reserve for the completion of the park.

Workers started leveling the land in the grass field next to the municipal complex in May in order to make way for the project.

The announcement of the park plans came with an update from Craft on several other town projects, including street overlay, finishing the substation and improvements to the slough.

Overlay project bids will be opened on July 26. This includes the resurfacing of Lee and Dotson streets, the end of Dogwood Street at the turnaround area, North Magnolia and Plum streets.

Peach and Myrtle streets are on the list for the next round of street projects, Craft said.

The town submitted D.A. Biglane Street for consideration for federal funding and expects to learn whether it will be approved in October, he said.

Craft also announced that the state allocated $943,000 toward the Vidalia slough project, which is estimated to cost approximately $1.3 million. The Department of Transportation has to approve the final design and ground likely won’t be broken until next year, Craft said.

“Vidalia’s future is so bright that people haven’t got a grasp of it,” Craft said.

The final purchase of rights of way to place a transmission line to Vidalia’s substation is close at hand, he said.

“The town council has been in meetings about that in executive session and right now letters are being passed back and forth between the town’s attorney and the land owner’s attorney. That’s ongoing.”

There will also be a July 21 bid opening for repairs to drainage issues behind Oak Street, Craft said.