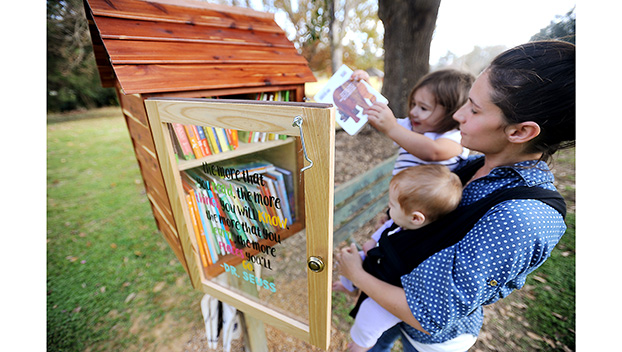 Callie Godfrey and her children Phoebe, 2, and Charlie, 6 months, look at the books in the Little Free Library in Duncan Park. Vidalia officials approved adding another Little Free Library to the Vidalia Riverfront during their Tuesday meeting. (File photo | The Natchez Democrat)

VIDALIA, La. — The Vidalia Riverfront will soon be home to a new “little free library.”

The Vidalia Board of Aldermen on Tuesday unanimously approved a proposal from Tracee Albert, a 2015 graduate of Vidalia High School and also the 2015 Miss Vidalia, to place a “little free library” on the riverfront.

This is a weatherproof box that anyone can walk up to and donate or check out books, similar to ones located on the Natchez bluff and Duncan Park.

Vidalia Mayor Buz Craft said he would also like the town to consider placing reading benches around it.

“It’s really a neat touch. I see people use the one in Natchez all of the time,” Craft said.

Albert graduated from the University of Louisiana at Monroe in 2019 with two degrees and is pursuing a master’s degree in professional therapy. Albert said she also owns a business teaching sign language.

“I’m very involved in the community and want to give back to our community,” she said, adding the little library is her way of doing so. “It is a catalyst for inspiring readers and expanding book access to all through global networking,” she said. “Vidalia is a city on the move and little libraries are so trendy now that I want to bring one to the Vidalia Riverfront. I think it would be a good way to impact children and adults.”