Parish school board to study feasibility of building new schools 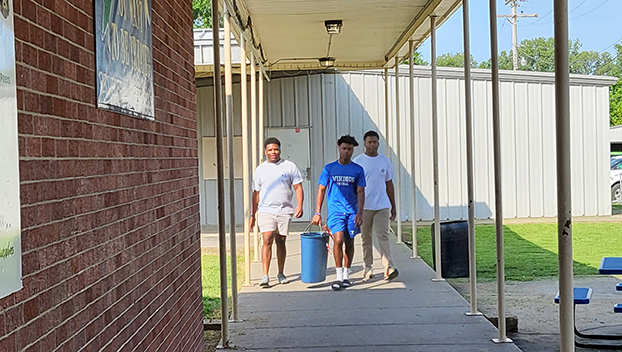 Vidalia High School football players help out with cleanup at Vidalia Junior High School after the school was broken into and vandalized last month. The Concordia Parish School board is now considering the possibility of revamping all its schools, perhaps building new schools. (File photo)

VIDALIA, La. — The Concordia Parish School Board will study the possibility of remodeling and possibly building new schools.

During the school board’s Thursday meeting, a motion to form a committee to start the process passed unanimously.

District 1B School Board Member Dorothy Parker made the motion by first stating she had attended school in Concordia Parish from the time she was in first grade and worked in the same schools for 35 years.

“I also was a teacher, assistant principal, principal, supervisor and director at the same schools and retired after 35 years at the same schools,” she said. “For that reason, I am finally asking that we form a committee to do a feasibility study of the current infrastructure of all of our schools to look at the possibility of revamping the schools, restructuring the schools even to the point of possibly—finally—building some new schools in Concordia Parish.”

She added, “If not now, when? The most frightening thing about change is the fact that we might never change. It’s worse than fear of change.”

There were no objections voiced to Parker’s motion. However, several board members chimed in by saying they should look at hiring professional consultants and conducting surveys for feedback from the school district.

“It’s a long process that cannot be pushed,” Board President Fred Butcher said.

The school board is also looking at security upgrades that will allow police departments and the sheriff’s department to tap into school security cameras in real-time to faster respond during emergencies.

The board heard a presentation from Mike Elliot of Homeland Safety Systems Inc. who said the system would also be equipped with facial recognition and would utilize student data from the district’s J Campus database to let administrators know when students and staff enter and exit a building.

The system would be able to tap into the school’s existing cameras and the school board is looking into purchasing additional cameras to cover any blind spots.

The board took no action on the security cameras on Thursday.