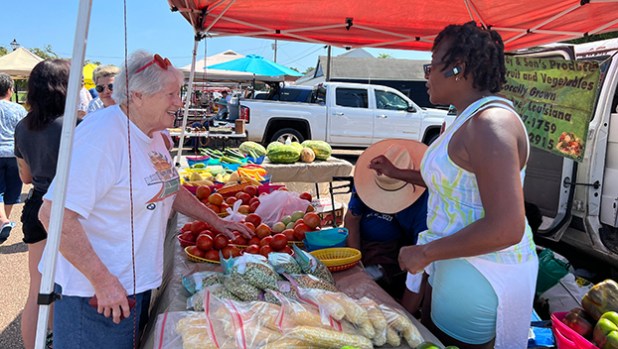 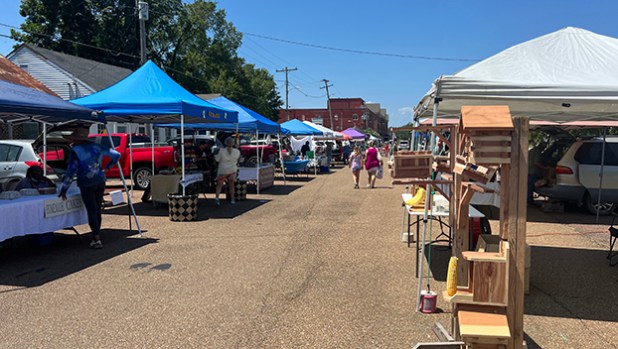 The Downtown Natchez Farmer’s Market maintains a regular 25 to 30 vendors from all across the region. (Sabrina Robertson | The Natchez Democrat) 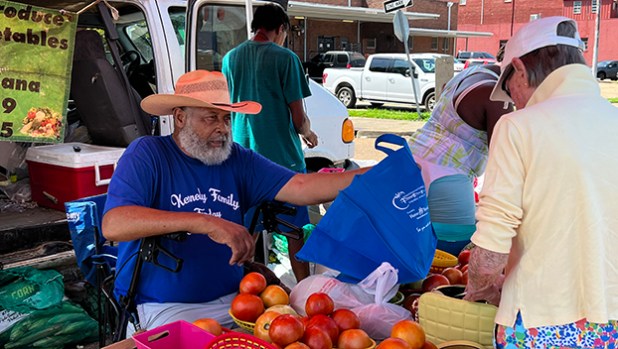 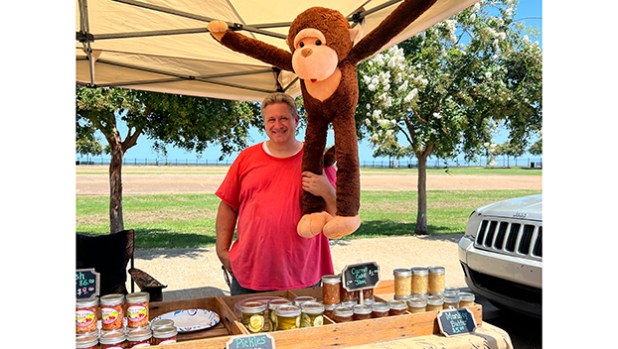 NATCHEZ —Eddie Kennedy of Kennedy & Son’s Produce in Oak Grove, Louisiana, packs up a truck full of produce before 5 a.m. every Saturday and drives two and one-half hours to Natchez to be at the farmer’s market before it opens at 8:30 a.m.

He stays until the Farmer’s Market Director Eddie Burkes rings the bell at noon—which alerts the vendors that it is time to pack up and alerts the customers of the market’s closing.

The number one rule for the vendors is that the products can’t be bought from somewhere else and resold. Everything is either grown or made by the sellers so that it is handed straight from producer to consumer without a “middle man” taking some of the profit, Burkes said.

It’s not the best-paying job in the world, but it’s how Kennedy makes his living, he said.

It’s the same for Robert Coleman, who sat underneath a giant cartoon-like stuffed monkey called “Frank” hanging from the roof of his tent.

Under Frank’s feet is a tray full of jars containing Coleman’s best-selling “Monkey Butter,” a jam that tastes like ripe fresh bananas.

But Coleman’s favorite is his homemade carrot-cake spread, which goes well with a piping hot biscuit, he said. His accent immediately alerts his customers that he’s not from around here. He grew up in South Africa.

“The boss,” he said, moved him and his business Four Rivers Farms to Jonesville, Louisiana.

By “boss,” he means his wife Kim. Coleman said he has been involved with the Natchez Farmer’s Market for the last four years.

Some aren’t there to necessarily make a buck, but rather to unite with new and old friends, Burkes said.

The Downtown Natchez Farmer’s Market maintains a regular 25 to 30 vendors.

“It really bloomed out during COVID because there was about a six-month period where people didn’t know where they would get their food so they came here,” he said.

Burkes added he is the director but there are many others involved in making the Natchez Farmer’s Market happen each week. It is put on by the City of Natchez Community Development department headed by James Johnston, Burkes said.

The Farmer’s Market will stay on the bluff for the foreseeable future because many of the businesses have found regular customers there, he said. In addition to farmers who travel for hours to sell their products, the farmer’s market has also become an incubator for local businesses, like the edible cookie dough maker Rolling ‘N’ the Dough.

“We have a lot more regular vendors,” Burkes said. “We almost fill up the space every week.”

“Before I would pack everything up and bring it to Commerce, and after an eight to 10-hour work day I would make $87,” he said. “It’s much better here.”