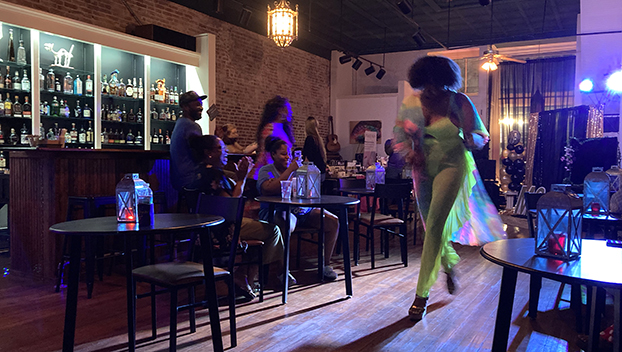 Before the show, shadows danced on the wall in the back room of Locust Alley on Saturday night. You could see them in the magenta lights of the bar area if you were angled correctly.

Models for the Natchez fashion show, hosted by Mississippi House of Fashion owner Jessica Hawkins and Thom Cat owner Thom Bailey, prepared for the runway in the back while music played from speakers in the front.

It was the first of two days of shows. The second, and main, show is tonight at 7:30 p.m. in the courtyard of Locust Alley at 511 Main St. It’s the first show of its kind in Natchez, and Hawkins said it will come back every year, each time bigger than the last.

Since opening her storefront, Hawkins said she had always wanted to start a fashion week, like the ones she admires all over the world.

Hers would be about power, and confidence, Hawkins said. “The models have been through a lot, to get them all together as one was amazing.”

There are so many boutiques in Natchez that she wants to bring together in the future for more shows, Hawkins said. She wants people to travel to Natchez for them, “just to have a minute to breathe and laugh,” she said.

The tables in Locust Alley were arranged in rows to create a runway to a stage where models could pose for an image and the audience.

“I can’t wait for y’all to see the spice that’s coming,” Hawkins said to the crowd, awaiting the first line up Mississippi House of Fashion pieces.

“Some of these models have overcome a lot,” she added. “There’s more than what you see. It’s not just what we have on, it’s what’s inside.”

That power and confidence shone as the models strutted, sometimes twirled and danced, between and around the tables at Locust Alley.

“When you brush your teeth every morning make sure you say ‘hey, what’s up gorgeous?’” Thom Bailey said, inspiring the crowd between collections.

The next lineup was swimwear. “These shells are coming off,” Hawkins said.

They strutted and twirled and danced again, in neons and tassles and other ocean-suitable designs. Then in lace and silk for the lingerie collection from Thom Cat.

After the show, the models gathered at the front to speak with the crowd about finding confidence in themselves, enough to model in public.

“I stand for fitness,” said Cailyn Riley, “I wanted to come and strut this new body.” She shouted out to her husband who sat in the back of the room, for helping her along her health journey. Riley had opened each collection.

Seleena Charles, a car salesperson by day, had walked the swimwear show in a neon one-piece and a silken robe that swept up behind her in the wind she created down the runway. She had laughed and smiled and made sure all angles of the outfit were seen by the paparazzi.

But Charles said to the crowd after the show that she had never felt attractive and had never admitted that until today, especially not publicly. She said Bailey had told her to say it, to face it.

“I am beautiful, I will say that to myself,” Charles said.