In a press release issued on Sunday by the CPSO, its Cyber Crime Unit began investigating in late June an adult communicating with a minor online. 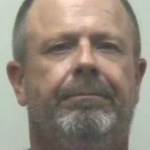 Jody Acreman (All persons are presumed innocent until proven guilty)

On Saturday, July 16, Acreman made plans to travel and meet the minor, arriving around 3:30 p.m. At that time, he was met by CPSO deputies and taken into custody without incident.

During the arrest, Acreman was found to be in possession of numerous adult items that he had brought, along with suspected methamphetamine.

Acreman was arrested and charged with Computer Aided Solicitation of a Minor; Indecent Behavior with Juveniles; Pornography Involving Juveniles, (6) Counts; Sexual Abuse of an Animal (Possessing Pornographic Images of Humans Engaged in Sex with Animals), (2) Counts; and Illegal Possession of Schedule II CDS

The investigation remains ongoing and Concordia Parish Sheriff David Hedrick asks that anyone with information is urged to contact the Cyber Crime Unit at (318) 336-5231 Ext. 400, or submit an anonymous tip online using the CPSO mobile app.