ART SHOW: Portraits and landscapes on display at new exhibit 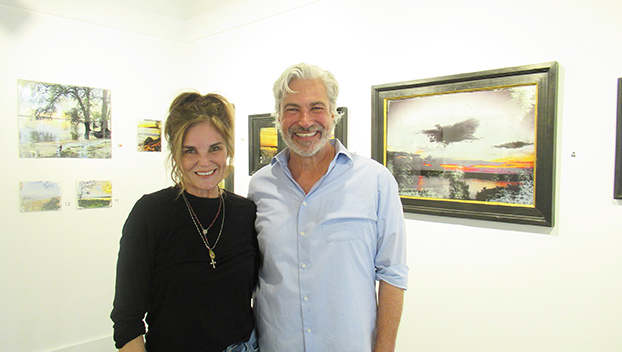 Debbie Willson and Beau Deshotel in Arts District Studio, where a new show is on display through the end of July. (Maia Bronfman | The Natchez Democrat)

Debbie Willson, a local artist, photographs Louisiana and Mississippi bayous. After printing and framing, the glassy depth of her preferred medium is clouded by gold and silver leaf, suspended above a scene which has been injected with and leaked of hue, as per Willson’s vision.

She is exhibiting her pieces for the second time in Beau Deshotel’s gallery, Arts District Studio at 107 Commerce St. The show began June 30 and will run summer-long.

With Willson, Forrest Germany, Esther Carpenter and Mark Coffey, the four exhibited artists, Deshotel said the pendulum is swinging back in the right direction for Natchez. Local artists, and current artists, have a display case downtown.

Like Hemingway’s café in Paris or Warhol’s “Factory” in New York, where books and silkscreens accumulate, so do people.

On a Thursday morning, Willson walked into Deshotel’s gallery, and to the workspace in the back which Deshotel uses as an interior design studio.

She sat at a table and began to read an antique handbook on nudism. Across from her, Deshotel described his plans for dollhouses which were lined up on a ledge near the ceiling: Kitschy light fixtures.

“With naked people silhouettes,” Willson added, taking a moment away from her book.

Some of Willson’s artworks, reversion photography prints on glass, were propped behind her.

“She is like a hunter,” Deshotel said about Willson, “she gets in her boat with a camera and shoots waterways up close and personal.”

The technique is rare and Willson was the first, 12 years ago.

His family once owned the Eola hotel, and though he went to art school, he ended up working for his family’s oil business.

“It’s a classic Natchez story,” Deshotel said. Deshotel only learned of Germany’s black and white portraits when saw them hanging in his home.

Asking Germany to display them, Deshotel said, “was like pulling teeth.”

But there will be a next show of Germany’s work, for his current project of photographing the remaining grand belles of Natchez.

Paintings by Esther Carpenter face Germany’s photographs. Carpenter grew up in Dunleith and had a stint as a renowned chef in New Orleans before moving back to Natchez and into Elms.

Carpenter’s pieces are mostly oil on canvas, with some oil on plywood. Her plywood subjects are formed through curved edges of wood but flattened by its half-inch depth.