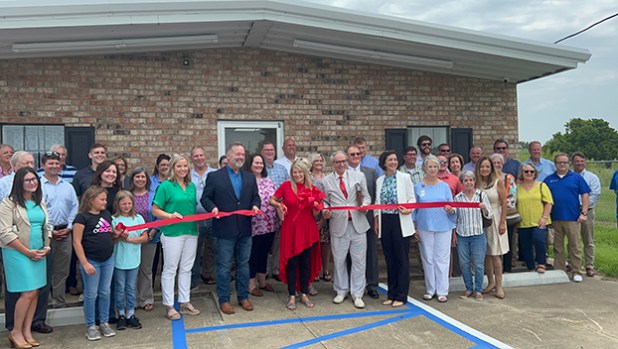 The Concordia Parish Chamber of Commerce, Mississippi and Louisiana members of the Knights of Columbus, Louisiana Sen. Glen Womack and many other public officials joined in a celebratory ribbon cutting in front of the new Miss Lou Pregnancy Center in Vidalia on Monday morning. (Sabrina Robertson | The Natchez Democrat) 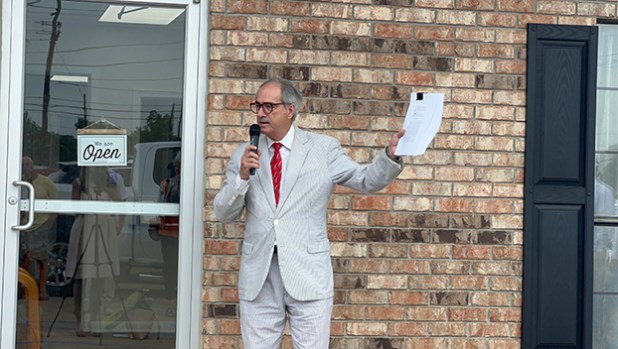 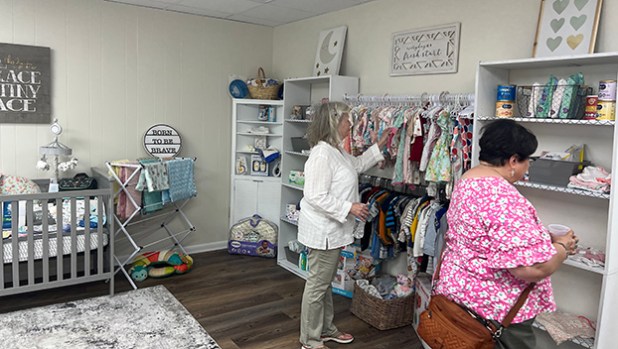 A boutique inside the center holds baby items such as car seats, bottles, clothing, formula and diapers. (Sabrina Robertson | The Natchez Democrat)

VIDALIA, La. — Regardless of their situation, those who find themselves with an unplanned pregnancy can receive free support at the new Miss Lou Pregnancy Center, which is now open in Vidalia.

The Concordia Parish Chamber of Commerce, Mississippi and Louisiana members of the Knights of Columbus, Louisiana Sen. Glen Womack and many other public officials joined in a celebratory ribbon cutting in front of the new center on Monday morning.

The pregnancy center’s operations are supported by donations, especially from churches and organizations such as the Knights of Columbus, which raised the money needed for Miss Lou Pregnancy Center’s ultrasound machine.

Kimberly Butler, the director of the Miss-Lou Pregnancy Center, said it will initially be open on Mondays and Wednesdays from 9 a.m. to 5 p.m. until it is fully staffed. The new center will also need volunteers to help receive clients, file records and teach classes.

Those who participate in the classes receive vouchers to spend in the center’s boutique area, which holds baby items such as car seats, bottles, clothing, formula and diapers.

Some of the volunteers and items for the new boutique will come from the Caring Hearts Pregnancy Resource Center in Natchez.

Ruth Powers, of Caring Hearts, said it would fold its efforts into the new pregnancy center in Vidalia. The Natchez center will close in order to combine their efforts, she said.

“There are so many here today who have donated,” Butler said. “We couldn’t be here today if it wasn’t for all of you. As we continue in our journey to help these women as God leads us, we ask you to continue to pray for us and we need volunteers and continued support.”

Clouds above provided a slight drizzle where dozens of people gathered, but not enough to force the ribbon cutting inside.

“Five years ago in September, when we opened up the doors of Cenla, we had a ribbon cutting and it was drizzling just like this,” said Claire Lemoine, executive director of Cenla Pregnancy Center. “I remember it because I remember thinking the Lord is crying down tears of thanksgiving. He is so merciful and so gracious. Also, I think he is pouring tears of so much hurt that is in this world, and so much pain and so much sin. But he’s here to wash us clean. This is a place where women can come and receive these drops of clarity and cleansing.”

Lemoine said women who suspect they are pregnant will be able to come to Miss Lou Pregnancy Center and receive a free pregnancy test and later on—with a sonogram machine arriving soon—their first ultrasound. Other resources available to mothers at the center include post-abortion support, consultations, classes and baby items for class participants.

While Miss Lou Pregnancy Center does not provide prenatal medical care, it can make referrals to other community care providers.

“If we make a difference in the life of one mother who found herself with an unplanned pregnancy and we loved on her and spoke the gospel of life into her and loved her into choosing life, that’s all that matters,” Lemoine said.

“What we do at crisis pregnancy centers is more important now than it ever was,” he said. “We will have the opportunity to serve young women in distress who need our help.”

The pregnancy center does not perform or make referrals for abortions but can offer support to women who are considering having an abortion and information about their health in a confidential and non-judgmental way, Lemoine said.

The center supports women as they carry babies to full term and continues providing support until the baby is two years old, she added.

To find out more about Cenla pregnancy centers, or to make a donation, visit cenlapc.com.