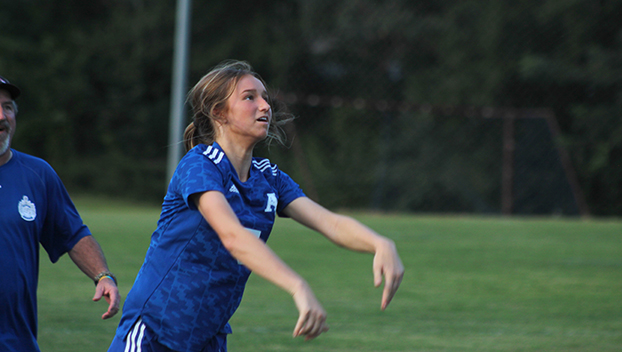 Senior Mallory Mcilwain throws in a ball against Cathedral last year. She is one of four seniors on the Lady Rebels squad. (Hunter Cloud | The Natchez Democrat)

NATCHEZ — Soccer season is right around the corner for the Adams County Christian School Lady Rebels.

Head Coach Chris Hughes said the team is looking pretty good with their first game at Hattiesburg on Aug. 2..

With players on vacation throughout the summer, Hughes said he is looking forward to having the full team together for practice soon.

AC has to replace Maddie Campbell who was a strong goal scorer last yea; Madi Cooley who was a creative midfielder; and Sarah Gordon, who was strong in defense as center back or goal keeper last season. Seniors Mallory Mcilwain, Ella Wilson, Jadyn Biglane and Claire Williams will have to step up this season.

“They have leadership experience and we will rely on them to teach these underclassmen,” Hughes said. “It will be a challenge replacing those graduates, but I think it is a good challenge for the younger girls. The ones who got to play 5 to 10 minutes will get double or triple game time … It may take a few games under their belt, but I think it will be natural to them.”

Last year, ACCS missed the playoffs but had a strong season including a sweep of their rival Cathedral. At times they showed they could score with ease or play solid defense. Brookhaven Academy and Copiah Academy played some of their best soccer in history and knocked AC and Cathedral out of the playoffs.

To reach the playoffs this year, AC must play together as a team and get prepared to play in the heat. Conditioning will be important as they are working on getting in shape for the season.

“I know it will be hot for them. We are having early practices in the morning to get them used to the heat. It is different from the boys’ season when it is cold,” Hughes said. “They have to get used to it. Being in soccer shape is different than anything else.”

Rebel graduate Chris Thompson has helped with the morning practices in his off-season from Alcorn State Football. He is a kicker for the Braves and played soccer at ACCS. Hughes said the girls have responded well to working with Thompson.

AC’s season starts with a game at Hattiesburg and then a soccer tournament at Brookhaven Academy on Aug.6. Hughes said he wants to see his team play a full game and not get tired. Once they can get used to playing in the heat they can play a whole game and be fine. He also would like to see as little injuries as possible which could be a challenge with 80 percent of his team participating in multiple sports. AC does not know who its starting keeper will be. Hughes said he does know what his team will play like.

“They always play aggressive. They aren’t scared to be aggressive and aren’t afraid of making a big tackle,” Hughes said. “To me they play more aggressive than our boys and I like to see that.”