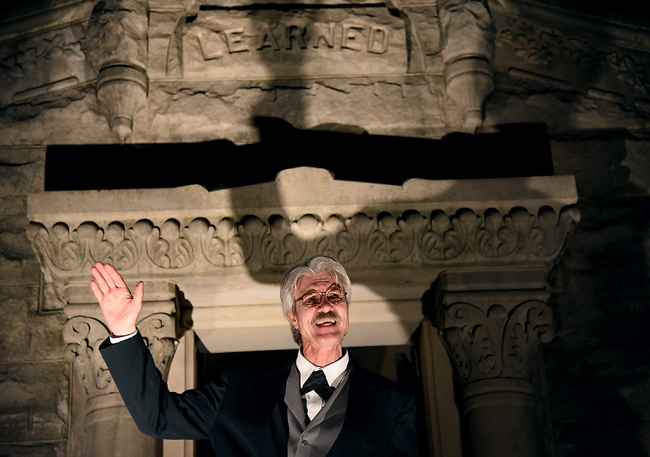 Sam Jones portrays Rufus F. Learned during the first night of the annual fundraiser Angels on the Bluff at the Natchez City Cemetery in 2016. (File photo)

The Natchez City Cemetery will host its 21st Angels on the Bluff with intriguing tours covering two weekends — Nov. 3, 4 and 5 plus Nov. 10, 11, and 12 — to accommodate the increasing number of attendees and commemorate the year’s continuing celebration of the cemetery’s 200th anniversary.

Each Thursday’s 12 tours and each Friday’s and Saturday’s 15 tours will showcase local talents portraying the following notable cemetery residents as Cemetery Board member Teri Tillman relates:

Rosalie Beekman: A Natchez native, young Rosalie was the second daughter of German Jewish immigrants Aaron and Fannie Beekman. As she and her family fled their Natchez Under the Hill home when the city was shelled by the USS Essex in September 1862, she was struck by shrapnel and died the next day.

Mary Elizabeth Postlethwaite: A graduate of the University of Michigan, Mary was born in Kalamazoo, Michigan, but grew up in Natchez. She is remembered as a dedicated, eccentric local historian and genealogist. In 2010, the Natchez City Cemetery was the recipient of the Mary Postlethwaite History Award, created in her honor by the Historic Natchez Foundation.

Reverend Henry P. “H. P.” Jacobs: Born enslaved in Alabama, Reverend Jacobs and his family escaped to freedom in Canada. Arriving in Natchez as an ordained Baptist minister after the Civil War, he also served in the State Legislature, and was instrumental in founding the Natchez Seminary, now Jackson State University.

Benjamin “Ben” Dixon: Born enslaved in Kentucky, Benjamin was in Natchez by1850 when he married his wife, Matilda, a free woman of color. After emancipation, he became a well-known Natchez gunsmith. A member of Hiram Revels Lodge No. 3, he was one of the oldest black Masons in Mississippi at his death in 1904.

Reverend Dr. Henry Tooley: A North Carolina native, Dr. Tooley arrived in Adams County, Mississippi Territory, about 1813. A true Renaissance man, he was a physician, Methodist Episcopal minister, noted astronomer, meteorologist, and scholar of ancient Near Eastern culture. Noteworthy is his study of the 1823 yellow fever epidemic and the 1840 Great Natchez Tornado.

Edward Lewis: A native of France who at eighteen was conscripted into the French army, Edward came to America in 1833 and eventually moved to Natchez where he became a successful auctioneer and salesman. An “educated Frenchman” and an “excellent Hebrew scholar,” he was buried with Masonic honors upon his death in 1868.

Clarence Charles Eyrich, Sr.: A New Orleans native, Clarence moved to Natchez in 1917 after falling in love with a local girl, Myrtle Evelyn Clark. Several generations fondly remember his warm hospitality. Under his management, the Eola Hotel became the social center of Natchez and a popular hotel for visitors to the Pilgrimage, the town’s annual tour of historic homes.

Tickets for ANGELS, the cemetery’s primary fundraiser with its traditionally sold-out tours, go on sale Aug. 1 on the cemetery website at www.thenatchezcitycemetery.com and the City of Natchez website at www.natchez.ms.us. With each $40 ticket, you will reserve both a date and a time. Tours leave every 15 minutes by bus from the Natchez Community Center at 215 Franklin Street with adequate parking nearby. About an hour and a half later, buses return to the center following each tour.

The approximate one-mile walking tour proceeds along the cemetery’s roadways with some digression across grassy areas. Be sure to arrive 15 minutes before the departure time shown on your ticket, and bring a flashlight.

Co-chairs for Angels of the Bluff 2022 are Pokey O’Beirne and Catherine Ratcliffe. About the ANGELS tradition, O’Beirne explains, “We have a lot of people who come every year. It is not uncommon to hear someone say, ‘This is my 14th year to attend ANGELS!’ This is a wonderful event for the cemetery and for the City of Natchez, and we are very appreciative of the many volunteers who help with ANGELS each year.”

Remember Aug. 1 to book your tickets early for the November performances as Angels on the Bluff enters its third decade of leading visitors along trails of enlightenment to tales of enrichment about the hallowed souls of the historic Natchez City Cemetery.

Jean Biglane is a member of the Natchez City Cemetery Association Board.