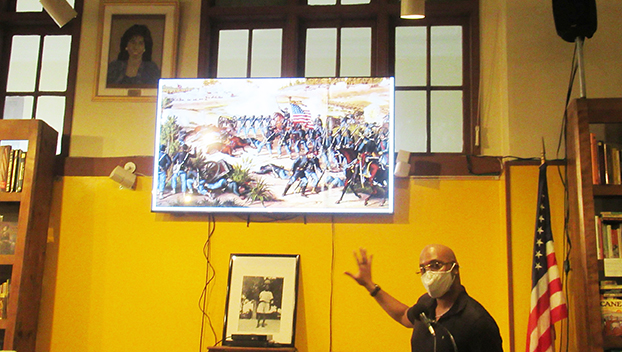 NATCHEZ — In 1887, William Simmons, a member of the U.S. Colored Troops and president of Simmons College of Kentucky, said, “I have noticed in my long experience as a teacher that some of our students are woefully ignorant of our great colored men, even ignorant of their names.”

Dr Holly Pinheiro Jr., assistant professor of African American History at Furman University and the son of a Navy officer, echoed that sentiment during a talk at the NAPAC Museum on Thursday night, saying “often the poor working colored troops’ families have been overlooked.”

Pinheiro’s research has not always been about families. When he began to research, he wanted to understand Black soldiers’ reflections on reconstruction, on the 13th, 14th and 15th amendments.

What he found in pension records, instead, were stories of unemployment, lack of access to education, domestic violence and anything that might have been evidence for a plea. Women, often widows, offered these statements out of desperation, and maybe a desire to have their lives recorded as history, Pinheiro said.

The intimacy and pain laced through the statements are at odds with government record, Pinheiro said. It is completely invasive, but it is also the basis of his research. The truths of people’s lives exist beyond their personal letters.

“They were at war with the Federal government as to what was a family,” Pinheiro said, adding another layer to the pension pleas. Because Philadelphia, his main geographical focus, was a hub for the underground railroad, a kind of biological, nuclear family as defined and accepted by the government was rare.

Pinheiro read letters, too, one from Andrew White to his mother Sarah Reeves after he enlisted in the 6th United States Colored Infantry (USCI). He wanted combat, he wrote in his letters, but said the Confederate Army would not engage.

“ ‘They are void of masculine patriotic honor due to their unwillingness to engage in armed combat,’ ” Pinheiro read from White’s letter.

“Black men were being hit from both sides,” Pinheiro said about calls to family and country. “They could be a hero nationally for a country that didn’t see them as equal by legal standards or they could be a man to their family but then they would have to leave service because they were begging them to come home.”

Pinheiro said there was a similar tension when black men tore the money they made from work where they were denigrated and underpaid, and then their families confronted them about needing the money that they had torn in protest.

Black women and families, Pinheiro said, are a focus of his work not only because they are often the voices in pension records but because they were so vital to the war effort but so overlooked.

Because the United States War Department would not provide for the Colored Troops, often Black women provided the needed medical care and clothing. They also raised funds for, and sometimes made, the regimental flags which the troops carried.

“My research became about their families and their lives after they had passed,” Pinheiro said.

His research became not only about the families, but about the generations of families. It led him to descendants.

In a talk once, he spoke about Alfred Rothwell and his wife, Elizabeth, and their story as a family after Rothwell enlisted.

He said someone had contacted him after the talk, saying that she was a descendant of that family. She had been speaking about the colored troops in her children’s classrooms and doing independent research, but the work changed when she heard her ancestor’s name spoken by somebody else.

“‘I didn’t think anyone cared, I felt so alone,’” she wrote in an email to Pinheiro. He began to cry as he read the email.

In Natchez, there will be a monument with 3,000 names of the colored troops that were stationed in the city during the Civil War.

“There are many untold stories that need to be told,” said Roscoe Barnes, cultural heritage and tourism manager at Visit Natchez and member of the colored troops monument project.

“Stories about the soldiers’ families, their years of bondage, freedom, how they built their lives after the war,” he said.

Because it’s possible that 90 percent of the African Americans in Natchez are descendants of the colored troops, according to Natchez City Historian Mimi Miller, the monument will also commemorate their descendants, and that ancestry.

ART SHOW: Portraits and landscapes on display at new…