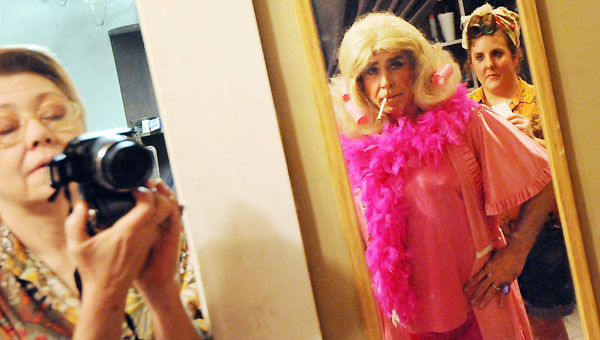 Rusty Jenkins is reflected in a mirror dressed up as Earl “Brother Boy” Ingram in “Sordid Lives” 10 years ago at Natchez Little Theatre. Jenkins co-stars with Bennie Boone in the reboot of “The Florist” this weekend for the theater’s 90th-anniversary celebration. (File Photo | The Natchez Democrat)

NATCHEZ — The Natchez Little Theatre, established in 1932, celebrates 90 years of drama, tears, laughter and entertainment this weekend with a free open house performance and silent auction.

Nicole Harris, a member of the NLT Board of Directors and performer, said a cocktail hour that includes refreshments, a silent auction and a cash bar would start the festivities at 6 p.m. Saturday. All proceeds will be used for upcoming performances and the upkeep of the theater, she said.

The auction includes a variety of items from paintings to weekend getaway packages, all of which were donated by local businesses and people who support Natchez Little Theatre.

“It takes between $3,000 to $4,000 to put on one play,” she said. “That doesn’t leave us with a whole lot to do any work with the building. … We want people to know that we’re still alive and kicking and that we 100 percent rely on the public’s support.”

After the cocktail hour, attendees are invited into the auditorium for a welcome and short throwback performance of “The Florist,” starring two of NLT’s well-seasoned actors Rusty Jenkins and Bennie Boone.

The event takes the place of the NLT Board’s annual meeting, so those who attend will also be able to hear more about the inter-workings of the theater and have a chance to become a part of it, Harris said. The audience will also hear two songs from NLT’s latest show, “James and the Giant Peach” and a song from their upcoming production “Little Shop of Horrors” and be introduced to the newly established improv group, the Natchez Little Theatre Players.

Besides financial support, one thing that NLT relies on to keep going is volunteers.

“Anybody who wants to be involved, we want them involved,” Harris said. “You don’t have to be on stage. There are 1,000 other things we need help with.”

What often happens, Harris said, is volunteers will help out with set designs, lights or sound equipment with no desire to be in the spotlight but later choose to be on stage—simply because it’s fun.

“It’s a welcoming environment,” she said. “We invite everyone, any age, race or gender. We don’t discriminate.”

Harris, last seen in Miss Firecracker Contest, said she shares little theater experiences with her daughter, who played James in “James and the Giant Peach.”

“The Little Theatre is such an important gym in the city and an underutilized attraction. … It’s close to my heart,” Harris said. “I want to see it succeed and become better.”