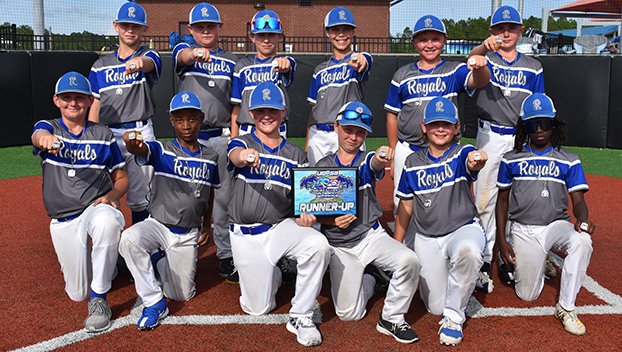 The 11U Mississippi Royals finished as runners up in the USSSA Gulf Coast Global AA World Series.

Mississippi Royals head coach Adam Conerly said the team did quite well in the AA World Series, which took place from Thursday, June 30,’ through Sunday, July 3, considering the level of competition and having to deal with the high heat and humidity during the tournament.

Over the four days of tournament play, the Royals played a total of eight games — including four games that Sunday after dropping to the losers’ bracket the day before in bracket play. And it was amazing that they advanced all the way to the title game.

“Thursday and Friday in pool play, we won one game and lost two. In bracket play, we won three games and lost two,” Conerly said. “We lost our first game Saturday, so that put us in the bottom of the losers’ bracket. We went back to our hotel later that day. We started back at 9 a.m. Sunday. They won all three games to make it to the championship game.”

After advancing through the losers’ bracket, the Royals would lose to the Hattiesburg Hawks in a close game, 3-1. Despite finishing runner-up, Conerly said we was really proud of the players for pushing through and persevering.

“Playing four games in one day is a lot, especially for 11-year-olds,” Conerly said. “On Sunday, the day they won three games, they had 21 hits. So the bats were hot. Our pitchers did really well. They struck out 11. We just had amazing defensive plays.”

Conerly not only wanted to acknowledge the players, but also assistant coaches Adam Flynn and Josh Beach. He also said he wasn’t shocked that his team played as well as it did and made it all the way to the championship game.

“Our kids wanted to go down there and compete. Pitching, hitting, defense, solid baserunning. Coming into Sunday, they had a very long, hard day ahead of them because every team ahead of them was a higher seed,” Conerly said. “I was very happy for them to put it together in the same day and come out in second place. It’s a very impressive thing to do.”

Not only did the Mississippi Royals did quite well in tournament play, but two of their players won two of the three individual competitions where they were playing against at least 60 other 11-year-olds.