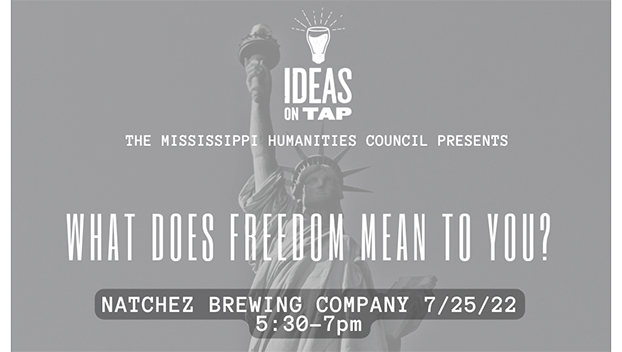 NATCHEZ — Mississippi Humanities Council wants to know what freedom means to you.

“After celebrating Juneteenth and our nation’s independence this year, it’s clear that freedom is unique to all of us,” said John Spann, program and outreach officer for MHC. “Is there any common ground on the meaning of the term?”

MHC is asking the question, “What does freedom mean to you?” in a three-part Ideas on Tap series, which it fondly calls the Freedom Tour.

“We are taking the program to Natchez, Columbus, and Jackson,” said Spann. “We have created a panel for each conversation to address what freedom means through various lenses, like immigration, African Americans, LGBTQ, and women.”

Guests are invited to share their perspectives of freedom and how they understand the term differently, Spann said. He noted the series is part MHC’s More Perfect Union initiative, which seeks to honor the Mississippians that challenged America and this state to provide freedom and justice for all.

In Natchez, the panel will consist of Kathleen Bond of the National Park Service, Roscoe Barnes III of Visit Natchez, and John Grady Burns. Spann will moderate the conversation.

“The Council is excited to host our first program of the series in Natchez,” Spann said. “The rich history the city has, plus the historic sites like the Forks of the Road and the John Banks House offer a great backdrop to the topic of freedom.”