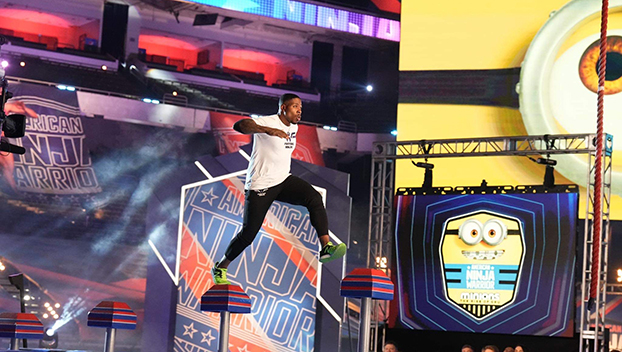 NATCHEZ — Former Natchez High School graduate and active Third Class Petty Officer Herbert Steadman competed under the lights against a backdrop of Minions in an American Ninja Warrior episode that aired on June 27. He is now back overseas on deployment with the Navy.

Steadman actually ran the course at the regional competition held in San Antonio, Texas. The contest was held in the Alamodome from March 20 to March 24. While his run didn’t make the TV broadcast, he said it was a great experience.

Behind the scenes, he met a lot of people and some of them who were on the show in previous years. His family from Mississippi, Texas and Louisiana came and watched.

“It is so bright on the course. You got lights all in your face. You can barely see the next obstacles,” Steadman. “One girl was supposed to go in front of me and she passed out from the nerves. It threw me off because all of a sudden I was next. When I stepped out on the first platform my adrenaline started. I went out there and a guy counted me down. I just went and all my adrenaline took over.”

He made his way past the first obstacle running up elevated platforms, tackled a challenging upper body strength obstacle and got to a balance obstacle where he had to run across small logs. This was where his run ended with two more obstacles ahead of the final warped wall climb.

In American Ninja Warrior, once a competitor falls he is done. Out of 120 competitors in Steadman’s group, only five completed the course.

“When I fell I didn’t know I had fallen. I just hit the water,” Steadman said. “It happened so fast. I was so nervous and I couldn’t focus on what was in front of me. It was different. My body couldn’t focus. I was so nervous. It was the most nervous I have ever been. Adrenaline had taken over and I forgot what was going on. It was an obstacle I had done before. I just didn’t take advantage of the opportunity.”

He started training for ninja warrior competitions in September 2020 at a gym in the Virginia Beach area where he is stationed and started training for the next season as soon as he got home. While he is with the Navy overseas, Steadman is working on pushups, pull ups and situps.

His goal is to run in the show again next year. He feels pretty good about his chances.

“I learned more about the run orders and how they do things. I think I will be prepared. I know what I’ll get into next time,” Steadman said. “I feel they liked my story. I’ll do another audition video while I’m overseas with the Navy and continue to workout for the next season.”