City says no alcohol period at pool or on pool property, or it will replace its appointed pool commissioners 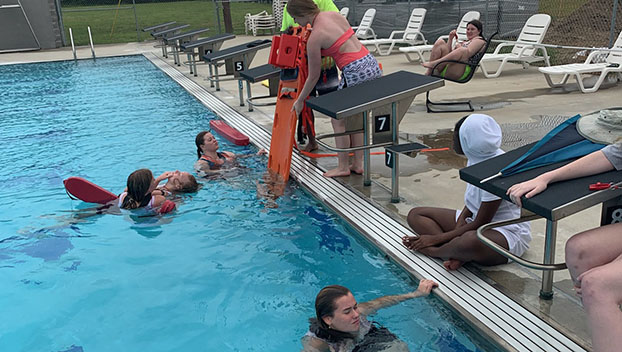 NATCHEZ — The Natchez Mayor and Board of Aldermen want the city’s appointees to the Natchez Community Pool Commission to support a no alcohol policy at the pool or tender their resignations.

That motion came after lengthy discussion and a similar motion made by Ward 1 Alderwoman Valencia Hall was tabled.

Hall made a motion at Tuesday night’s meeting of the Mayor and Board of Aldermen to recall the city’s appointed community pool commissioners in seven days unless they call a special meeting to rescind previous action taken to allow alcohol consumption during private pool rentals.

That motion was tabled primarily because of the upcoming meeting on Wednesday between the city and county, during which issues with the community swimming pool are expected to be a topic of conversation.

The City of Natchez and Adams County jointly own the community swimming pool, which is located next to Natchez High School on Seargent S. Prentiss Drive. It is governed by a group of six commissioners — three appointed by the county and three by the city.

The city’s appointed pool commissioners are Marcus Sullivan, Dennis Hogue and Kari Simpson. The county’s appointees to the commission are Jimmy Ware, who serves as president, Derrick Batiste and Bubba Bruce.

The issue of alcohol came up earlier this summer when pool officials agreed to rent the pool to a private person who was selling wristbands to the private event and planned to serve alcohol.

Contacted by The Natchez Democrat at the time the individual was selling wristbands for the private party, Ware said the pool board changed its policy and began to allow alcohol under certain provisions when the pool was rented out sometime in 2019. However, Ware could not produce minutes showing when the pool’s board made that change, and the contract used to rent out the pool still read that alcohol was prohibited.

About a month ago, the city’s board of aldermen went on record saying alcohol is not allowed at the community pool under any circumstances, and said such is a decision for city and county officials to make, not the pool commission, because the city and county bear ultimate responsibility.

The Adams County Board of Supervisors also asked Ware and the pool commission to reconsider allowing alcohol at private events at the pool. At the time, District 4 Supervisor Ricky Gray said swimming pools and alcohol don’t mix.

Nonetheless, Ware reported to the county at its last meeting that the board would not back down on its policy to allow alcohol at private events.

At Tuesday’s city meeting, Hall reported she had discussed the issue with the pool commissioners and that they have refused to revisit the issue.

“This is not a private venue. It is city-owned property. We already have a policy set that states no alcohol is allowed at the pool. For whatever reason, the commission felt it could go over this board,” Hall said.

She also said the interlocal agreement with the county approved on Sept. 23, 2021, involving the pool says the city should have received a budget by July 1 of this year from the pool commission.

“We do not have that budget. They cannot set salaries or anything else,” Hall said.

“We have three really good board members, and we appreciate their work, but the intention for the pool is to be a place for recreation for everyone, and not to be rented out for private parties,” said Ward 3 Alderwoman Sarah Carter Smith.

Alderwoman Felicia Bridgewater Irving made the motion to table Hall’s motion, which was seconded by Ward 2 Alderman Billy Joe Frazier. Both said action should wait until the joint meeting with the county on Wednesday.

“I am fine with waiting, but we have already said there should be no alcohol at the pool,” said Natchez Mayor Dan Gibson.

“I stand in agreement that no alcohol should be served at that pool. We are on record saying that. The pool is very different from other city property because lifeguards’ lives are on the line. It is a very heightened, dangerous situation for lifeguards trying to rescue someone who is intoxicated. It’s a situation where an intoxicated individual can drown the lifeguard who is trying to save them. We and the county bear that responsibility. And if a tragedy occurs there, even this weekend, then anyone who has allowed alcohol to be served at that pool will have that responsibility on their conscience,” he said.

Further, Gibson said, if alcohol is deemed to be allowed at the community swimming pool, he wants the city to no longer have anything to do with the pool.

“I want the city to absolutely pull away from that pool. I was a risk management consultant for many years and I can tell you from my professional background this is not a risk the city needs and could cause the city’s insurance premiums to go up,” he said.

Ward 6 Alderman Dan Dillard proposed a motion saying the board of aldermen to reiterate the city’s position that alcohol is not allowed at the pool or on any pool property period, and for that information to be conveyed in writing to each of the city’s appointees on the pool commission. Further, if those pool commissioners do not abide by that no alcohol policy and continue to support alcohol at the pool, it will result in a request for their resignation.