Memories of tragedy and tragedies of memory: A hidden memorial in an abandoned cemetery 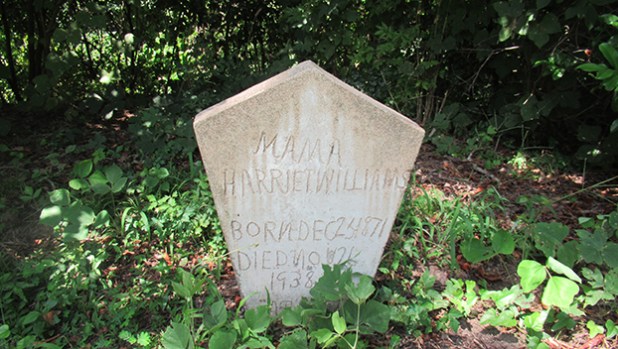 Headstone near the marsh at Watkins Street Cemetery. (Maia Bronfman | The Natchez Democrat) 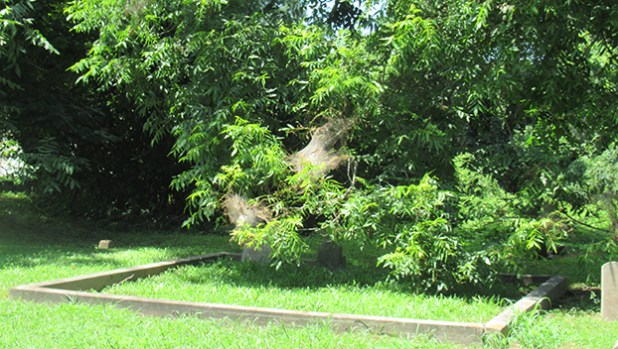 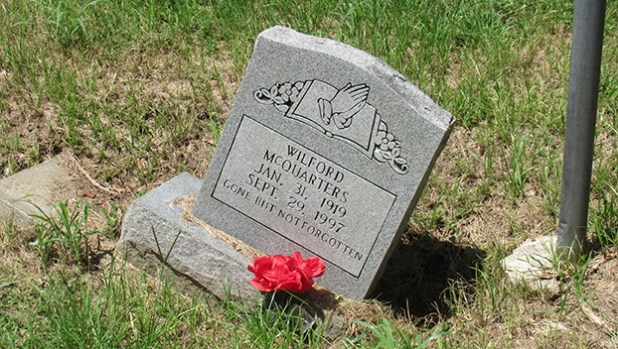 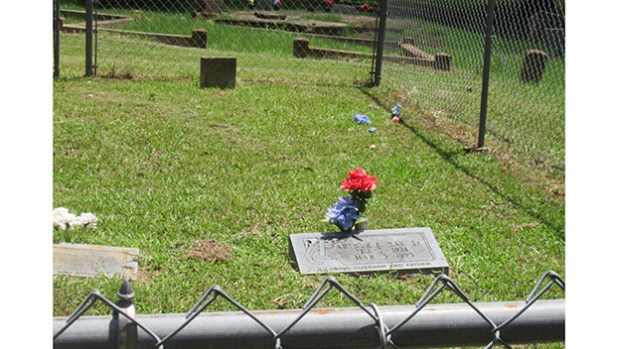 NATCHEZ — One memorial to the victims of the Rhythm Night Club fire sits on the bluff, an approach that only involves paved walkways from the city’s downtown.

Another memorial is at Watkins Street Cemetery, a near-abandoned and historically Black site.

The only approach is by car and through a gravel path pitched horizontally at 20 degrees. The foreseeable divots in the path can’t technically be called potholes but they still might bottom you out.

The path is narrow, too.

“One way in one way out,” said Monroe Sago, owner of the Rhythm Night Club Museum.

Eventually, there is a marker, blue letters on a white sign screwed into galvanized u-channel posts, which reads “1940 Rhythm Night Club Burial Site.”

It’s a sign for you to lock in your parking brake. It isn’t a sign that you’ve arrived at the oak tree where oral history says the unmarked grave is.

“That’s not the spot. It needs to be down further,” Betty Sago, Monroe’s wife and museum co-owner said about the sign’s location.

Or, she said, there could be two arrows on the sign: one to point toward the mass gravesite, and another to point in the direction of traffic.

Watkins’ cemetery is not city-owned, nor can it receive federal funds for maintenance because of long-established concerns over the separation of church and state, said Sarah Owen, an architectural historian at the Historic Natchez Foundation.

A law enacted in 2019, House Bill 1477, gave the city a broader authority to maintain the cemetery. The municipality has since undertaken the project of repair.

The city resolved in the spring to allocate $7,500, partly reappropriated funds from the Worthy Women of Watkins — a group that has traditionally overseen and cared for the cemetery — toward cemetery maintenance and commission Dave Jenkins for landscaping.

But spider webs span the branches of trees above burial plots, which dip low enough to wrestle with the tips of uncut grass. In and among the plots, most of the graves are sunken and their lettering has been weathered away.

The 10 founders of the Natchez Colored Cemetery Association incorporated Watkins in 1911. Since incorporation, some plots have been transferred to out-of-state residents as families moved. Other ownerships have been obscured as the incorporation became unwoven, and as people were buried without authorization, although it might not have been clear who the authority was or if there was an authority.

In 2005, the late Thelma White formed the Worthy Women of Watkins at the same time Mayor Phillip West requested information on the cemetery from the Natchez Historic Foundation.

White was among the graduating class at Brumfield High School which lost many students to the Rhythm Night Club fire. She hadn’t gone to the concert because she couldn’t afford a ticket.

“ ‘Everything was segregated. It was totally white, or totally black. Everything in Natchez that was public was private because we couldn’t go.’ ”

There was a large auditorium in Natchez, but it was reserved for the white community, thus the Black community had to jitterbug in a former blacksmith shop turned ballroom.

When White formed the Worthy Women of Watkins, it was to cut back the weeds which had grown over the gravestones of the fire victims. They evened paths, too, and trimmed grass. But they were volunteers, and old. Today there is only one living member of the Worthy Women.

“The only reason to volunteer is because you’re too old to work. We need full time caretakers, not someone who is going to die trying to take care of the dead,” Betty said.

When the city approached the issue in 2005, they were working under the state’s abandoned cemetery program, House Bill 780. It allowed boards of supervisors to maintain “abandoned historic cemeteries.”

‘Historic’ meant 100 years or older and ‘abandoned’ meant there couldn’t be ongoing burials, legal or illegal. The cemetery was, at the time, outside of both categories though it was soon to reach its centennial.

“The city needed to imminent domain it,” Mimi Miller said, recalling her response to the 2005 inquiry.

There would still be the problems of expense based on an unknown charter, determining lot ownership based on neglected records, and regulating continuing burials.

West was unable to solve the problem of Watkins Street Cemetery during his tenure as mayor.

Around 2012 Tony Scudiero, a career casino manager, took interest in Watkins. At the time he was vice president of the now-closed Isle of Capri Casino. He would bus employees to the cemetery for voluntary landscaping work.

In September 2012, he donated a permanent marker for the site of the mass grave of Rhythm Night Club fire victims.

Two benches and a line of crepe myrtles approach the granite memorial on both sides. It is near the marsh border of the cemetery, at the bottom of the hill which the gravel road summits.

“Thy remembrance shall endure into all generations,” it reads, quoting from Psalms 102.

Before the memorial was placed, the location of the mass grave was unmarked.

Monroe said a survivor of the fire came to him in 1983, when he ran a car detailing business where his museum now stands.

Way at the back, under the big oak tree, she told him. The burns on some victims made them unidentifiable, so they were taken in flat bad trucks to a single grave on the periphery of the Watkins Street Cemetery.

Two hundred and nine people died in the fire started by a cigarette butt and petroleum-coated Spanish moss. Many were trampled before they were burned because all but one entrance had been boarded up to prevent gatecrashers.

“World-weary musicians called this the toilet set-up – one way in, one way out,” Preston Lauterbach wrote in his historical account of the Chitlin’ circuit, a collection of Black performance venues throughout the southern, eastern and Midwest United States.

Outside, Betty’s mini cooper is often parked under a line of crepe myrtles. “RNCMM1” the license plate reads.

Inside are recorded oral histories of survivors and newspaper clippings from the date.

Alderwomen for Ward 1 Valencia Hall’s paternal grandmother died in the fire. She was found under a pile of bodies, trampled, not burned.

One clipped article on the wall of the museum records people being jailed for distributing pamphlets that said the fire was a result of Jim Crowism.

“That’s an atrocity, to accuse the white community,” Hall said.

Hall said she’s known about Watkins since she was a kid, and that it wasn’t always in such neglect.

Natchez Mayor Dan Gibson said he is hoping to host an annual event to initiate a conversation, to encourage donations and volunteers.

“So many notable Natchezians are buried there,” Gibson said. “The history of the site, one part of Natchez’s history, has been overlooked and it must be preserved and told.”

On one late Friday morning, Hall walked down the hill near the west end of the cemetery toward the fire memorial. Hall’s paternal grandmother is buried at the Natchez City Cemetery, but the granite sign at the base of the hill memorializes her, too.

Hall walked gingerly by gravestones, on ground hidden by weeds. She tried to sidestep anything that was definitely a grave.

Hall said her father used to go to the annual memorial for survivors and families of the victims of the Rhythm Night Club fire. Hall stopped going with him in the early 2000s.

“I didn’t want to relive it every year,” she said.