Give me ‘Latest mentions of Natchez on Jeopardy’ for $200 please 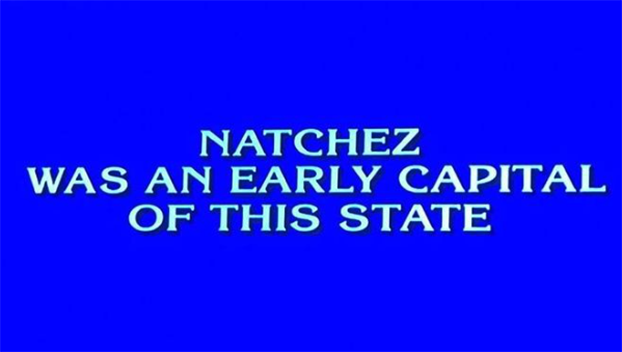 The Answer: The latest Mississippi city to be featured on the game show Jeopardy! The Question: What is Natchez?

Local fans were pleasantly surprised when gameshow host Ken Jennings revealed the $200 clue for the category “The Southern US” in the First Round of Wednesday’s televised episode of Jeopardy!

The Answer: Natchez was an early capital of this state.

The Question: What is Mississippi?

Unfortunately, Coulson would go on to lose his 2-day title to Brianne Barker, a biology professor from Madison, New Jersey.

According to a website that archives the show’s clues and questions, the word “Natchez” has been featured in at least 36 Jeopardy! clues or answers since 1984.