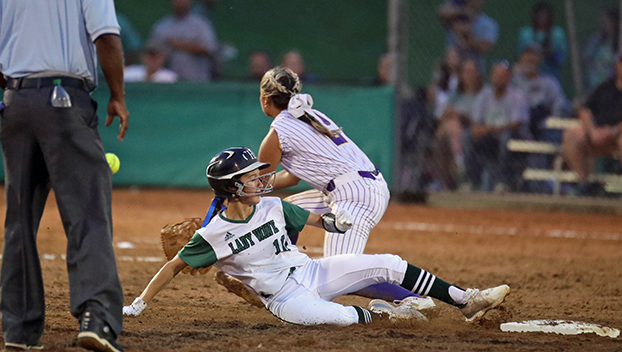 NATCHEZ — Lily Crum had a big game for Cathedral High School’s varsity softball team both on the mound and at the plate as the Lady Green Wave defeated the Centreville Academy Lady Tigers 10-0 last Friday night in the season-opener for both teams.

Crum allowed just one hit, a single by Rylee Shell in the first inning, struck out seven batters, and walked only one batter in four innings to pick up the win. Crum also went 3-for-3 with a triple and two runs batted in.

“Lily had a great game. She only gave up one hit, struck out seven, and went 3-for-3. She had a great all-around game,” Lady Green Wave head coach Craig Beesley said. “Hopefully she can work in the strike zone for us this year.”

Marlie Hargon came on in relief of Crum and struck out one to close out the Lady Tigers.

Madelyn Felder went 2-for-3 with two RBIs while Molly Shirley was 2-for-3 with one RBI and three runs scored.

“They both had big games offensively,” Beesley said.

Baylee Ford allowed 10 runs, four of them earned because of four Centreville errors, gave up 10 hits, struck out just one and hit one batter in her four innings on the mound.

Beesley said he was glad to see his team hit the ball as hard and as well as it did. He added that he was pleased that Cathedral had double-digit hits in the opener.

“I thought it was a good first game of the year for us. Hopefully, we can build on that until our district play starts,” Beesley said.

Cathedral (1-0) played host to Oak Forest Academy Monday at 6:15 p.m. and then traveled to Clinton, la. to take on Silliman Institute at 6:15 p.m. Tuesday to start what Beesley described as “a big week for Cathedral softball.”