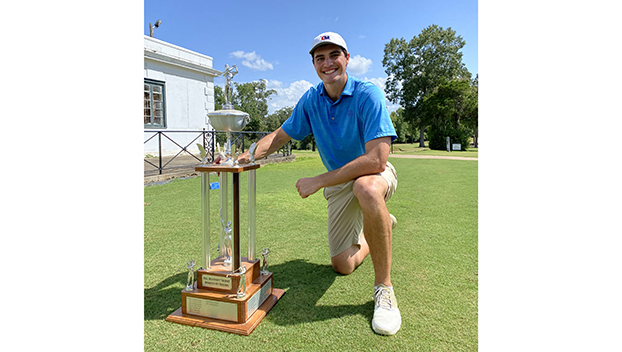 NATCHEZ — While first-round co-leaders Casey Ham and defending champion Chase Kaiser struggled in last Sunday’s final round of the 2022 Bill McKenney Memorial City Golf Championship, Griffin Agent overtook both of them down the stretch.

Thanks to birdies on No. 14, No. 15, and No. 17 on the Duncan Park Golf Course, Agent ended up shooting 4-under-par 67 for a two-day score of 6-under-par 136 to defeat Ham by one shot in the championship flight for his first city title.

“Feels pretty good (winning the city title. I’m not going to lie,” Agent said. “I wouldn’t say I was going to be here until my last five holes. I thought I was out of reach. I had a nice run at the end and it all worked out,” Agent said.

Agent’s birdie on the 17th hole gave him a one-shot lead over Ham and that was enough for him to come out on top. He said the course played tougher on Sunday than it did on Saturday

“I was a little surprised. I figured there would be a little lower scoring,” “I knew I definitely had it in me (to shoot 67). I didn’t have my best for most of the round. Near the end, I started hitting it better. I made the putts I needed to close out the tournament.” Agent said.

After winning the Norman Puckett Junior Championship on the same course back in 2013 and 2015, Agent became the first dual champion the city had ever had.

“I figured someone had done it before,” Agent said. “Norman Puckett is a great tournament. I grew up in Madison and came down to Natchez. I played in it four different times. I then played college golf at Mississippi State.

“That was one of the big things. This was my second year playing (in the city golf tournament). I moved to Natchez in June 2021 to work for Natchez Wealth Management. Last year I really set my mind to really win. Chase Kaiser won it last year. He had an amazing tournament.”

One of the participants Agent played with in the next-to-last group on Sunday was Bill Byrne, who helped him settle in to Natchez just over a year ago.

“I played with Bill in the tournament yesterday. Funny where golf can take you,” Agent added. “I’ve enjoyed my first year living her. The golf community is neat here in Natchez. After I birdied 14 and 15, I had three holes left and I had no clue what the guys behind me were doing. I’m not into scoreboard watching. I asked someone how they were doing. Once he told me, it gave me a boost of adrenaline. I knew I had to make at least one birdie, perhaps two. I was able to make that one on 17.”

Duncan Park golf course superintendent Greg Brooking, who entered the final round one stroke back of Ham and Kaiser with a solid 4-under-par 67, shot a disappointing round of 2-over-par 73 to finish third with a two-day score of 2-under-par 140.

Perhaps what was most stunning was that Kaiser, one of the youngest players in the field and who also shot 66 on Saturday, struggled mightily on the course and shot a final-round 76 to finish in sixth place with a two-day score of even-par 142.

“I played really great Saturday. I still didn’t putt all that great, but I struck it very well,” Kaiser said. “Sunday, it was rough. I really didn’t hit it all that bad. Just couldn’t putt. Couldn’t make a single putt.”

Kaiser said that the putter wasn’t working for him on Sunday like it was on Saturday. He added that the course was gettable on Saturday because of the rain that came through last Friday night, allowing it to soften some and be easier than usual.