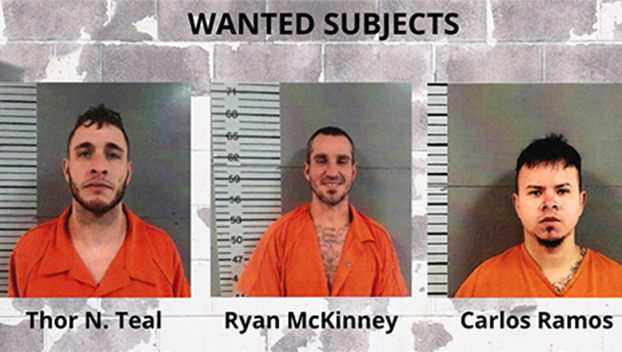 Pictured from left, Thor N. Teal, Ryan McKinney and Carlos Ramos are wanted after escaping from Concordia Parish Corrections Facility in Ferriday, Louisiana. Anyone with information is asked to contact CPSO at 318-336-5231 or 9-1-1. All persons are presumed innocent until proven guilty. Photo courtesy of Concordia Parish Sheriff's Office.

FERRIDAY, La. — A former Concordia Parish Corrections Facility I employee was arrested Monday and is charged with malfeasance in office after authorities say he “knowingly confirmed an incorrect head count of a prison dorm which resulted in a delay of CPCF  I officials identifying missing inmates.”

The charge on Patrick V. Moreno, 21, came right after three pre-trial inmates escaped from the facility on Louisiana Highway 15 in Ferriday, Louisiana, at approximately 1:30 a.m. Monday.

All three are believed to be in their home parishes and are all non-violent offenders, according to a news release from CPSO.

McKinney is charged with theft; possession of schedule I and schedule II controlled substances; theft of a motor vehicle; resisting an officer; possession of drug paraphernalia; obstructing public passage; aggravated assault and aggravated flight from an officer. McKinney is described as being 5 feet and 7 inches tall weighing approximately 170 pounds.

Ramos is charged with possession of synthetic cannabis. He is described as being 5 feet, 6 inches tall and weighing approximately 155 pounds.

Teal is charged with possession of schedule II controlled substances and possession of stolen things and a warrant from another agency. He is described as being 6 feet, 2 inches tall and approximately weighing 180 pounds.