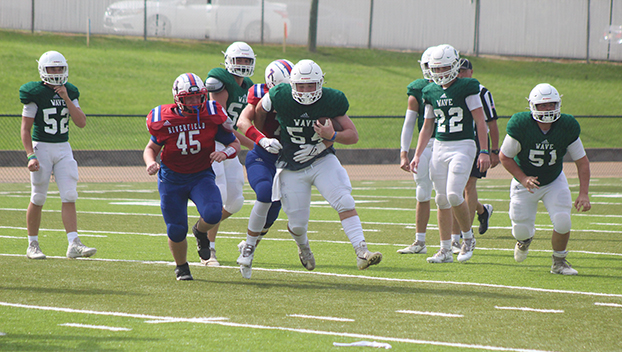 Junior center Hayden Cotton had a 10 yard reception against Riverfield Academy Thursday afternoon. It was not a trick play but an accident. Cotton said he looked up, saw the ball and made a catch. (Hunter Cloud | The Daily Leader)

WESSON — Brookhaven Academy, Riverfield Academy and Cathedral met on the turf field at Copiah-Lincoln Community College Thursday for a pre-season scrimmage. Football is now two weeks away for the schools, and the scrimmage was a chance to tune up in a live game setting.

Cathedral’s Kaden Batieste scored on an 80-yard pick six and a 70-yard bubble screen reception in the team’s scrimmage against Brookhaven Academy.

Batieste’s speed, elusiveness and play making ability will be dangerous this season. His two plays were not the only highlight of the day.

Safety Tristan Fondren made an interception and a touchdown saving tackle in the scrimmages. Senior Mason Moore showed he could be a strong possession receiver and quarterback Noah Russ kept plays alive with his legs when needed.

The best play of the day was a “trick play.” Center Hayden Cotton had a 10-yard reception against Riverfield. A junior, it was one of his best plays since he started playing football in third grade.

“I was pass blocking and I heard a loud thud. I looked up and I saw the ball, I caught it and took off,” Cotton said.

Russ had his pass blocked at the line of scrimmage and Cotton made a heads up play to catch the ball and try to get up field. Head Coach Chuck Darbonne started yelling for him to get down because he didn’t want one of his linemen to get hurt in a scrimmage.

Cotton had other ideas.

“I was trying to take off and score a touchdown,” he said.

Riverfield’s defensive line did not let him break away for a touchdown. The play was still cool, he said. As a center, he technically touches the ball every play to snap it. His catch was a little surprising to him but it looked smooth.

“I knew I could catch it, but I was surprised I got the chance,” he said.

It was the first time Cotton played on a turf field at a college or community college. He loves football and wants to play it in college one day. If playing football does not work out he would like to coach.

Cathedral continues to make progress towards the upcoming football season and he is ready.

“”We are excited for the season,” Cotton said. “We are looking better than we did last year.”