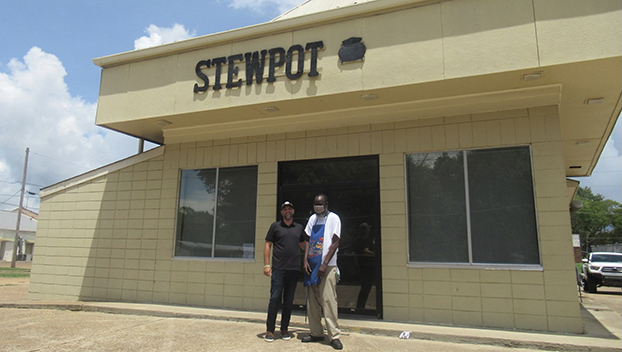 Marcus Archer and Dewayne Blanton stand outside the Stewpot building, which was once a KFC. (Maia Bronfman | The Natchez Democrat)

The scarcity that you might see at the grocery store is increased exponentially at the Stewpot, a food ministry located at 69 E Franklin St.

They used to get truck deliveries which weighed 1,500 pounds, now deliveries are half of that.

During the afternoon of July 29, Archer posted images on Facebook of those emptier shelves. He deleted the post two days later, after it had been shared over 400 times. The overwhelming response of phone calls and messages, he said, had to be mitigated.

Most of the response was from people who were not regular or prior contributors, which he said was incredible.

“But some people took it as ‘our shelves are completely empty,’ as ‘we have no food.’ That is partially true,” he said. He tries to inform people about need ethically, and accurately. The response was not proportionate to the need, so he decided to remove the post.

The Stewpot cooks 250 meals once a day, every day of every week. About 160 of those get delivered. Though they’ve had to become more creative with their ingredients amidst food scarcity, they have not faltered from those numbers.

Feeding America is partly funded and sourced by donations, which is often the first thing to go during periods of inflation. The remaining donation figures, if matched by dollar amount, are then less valuable in the food market.

That’s the case with all non-profits, Archer said, an economic downturn for an LLC is a near-vertical pitched freefall for a 501(c)(3).

Except with tomato-based products and pistachios, Archer said, which are plentiful. But Johnnie Davis, who’s been cooking at Stewpot for 34 of its 37 years, has yet to create a successful recipe which combines the two.

They are short on, but not without, meats. The empty shelf which was pictured in the Facebook post is usually filled with canned corn and green beans.

Based on the scale of the immediate response, Archer said he expects an influx of food within the next two weeks.

“Most people want to help, they just need direction,” Archer said. Some people have offered to purchase specific items. Others have ordered large shipments from Hicks Chiks, a food-distribution company in Natchez. Even a Jonesville rodeo has plans to hold a Stewpot fundraiser on Aug. 20.

Covid, he said, has also opened people’s eyes to need, of types and of depths that they might not have seen before. That might have been why the response to his post was so intense.

If they do receive an overflow of perishables, Archer said they can donate them to other local food pantries or set them outside the Stewpot to create a temporary pantry of their own. “We are very conscious to not misuse donations or waste food,” he said.

Archer said they never come to the end of need, but they can fulfill their mission.

The dining area hasn’t been open since covid, but that will change soon. It’s a place where people can join each other even if they aren’t eating.

“It is about building the Kingdom, about breathing life into places of darkness,” Archer said.

“Some of the people have had life sucked out of them. They have had a hard life, a hard year, a hard week. The stinky uneducated fishermen, that’s the people Jesus hung out with. That is where you are supposed to be,” Archer said.

He excitedly anticipates the day the dining area reopens.

Right now, the Stewpot needs volunteer drivers to complete deliveries. There are three mapped routes Monday through Saturday and one on Sunday, all which need to be completed every week. One route can last from one to one and a half hours, and they are all within the city limits.

Because of a shortage of drivers and gas inflation, the current delivery volunteers are bearing a large burden. Any help, Archer said, would fill an immediate need.

To contact Marcus Archer about volunteering as a delivery driver for Stewpot, you can call 601-431-7394, email pmcrosspoint@gmail.com or send a Facebook direct message via the Stewpot’s page.