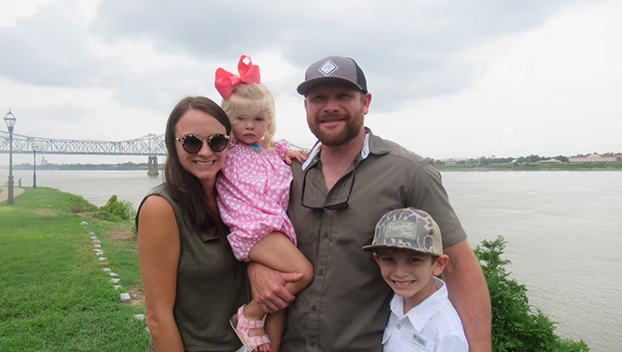 Whitney and Cole Bradford with their children, Ella and Hayes on Silver Street. (Maia Bronfman | The Natchez Democrat)

NATCHEZ — On a bench at Natchez Under-the-hill, Cole Bradford and his two children, Ella and Hayes, took a recess from lunch with his mother-in-law, their grandmother.

It’s one of their last days together before Hayes goes to Cathedral Elementary School, Ella goes to Jefferson Street Preschool and Bradford starts a new post as a travel nurse at West Jefferson Medical Center near New Orleans.

Bradford grew up in Natchez. After graduating, he joined the army in 2008 and went to Iraq. He said the lifesaver training in the army, and training simulations with wounded soldiers moved him towards a nursing career.

When he left the Army in 2011 his GI bill paid for a degree in Licensed Practical Nursing. After he completed his Associates, he returned home to Natchez for a position at Merit.

When Covid-19 struck, nursing shortages worsened and patient numbers soared. Going from a permanent post to a traveling one meant higher pay, and more opportunity, he said.

“There were adventures, but there were also stressful times,” he said.

He worked at posts in New Jersey, Texas and Louisiana where he treated some non-critical patients and others on ventilators. Because of the nursing shortage and patient demand Bradford said ‘taking ratios’ on dangerous assignments became unbalanced.

The typical ‘taking ration’ in an intensive care unit is two patients to one nurse. During Covid, he often found himself treating four patients, some on ventilators and others on less extreme versions of oxygen support.

Other patients, the hospitals would have to put on ‘ER hold,’ which meant they would wait in the emergency room for days without having a nurse assigned to them.

“We would have enough beds, just not enough staff,” Bradford explained.

Many nurses, he said, have been burnt out from the pandemic. His next post in New Orleans is 13 weeks long. He’s hoping to negotiate a blocked schedule so he can come home to his family between working periods. When he worked in New Jersey, in Salem, he had eight days on and six days off.

Whitney, Bradford’s wife, joined him at the bench after brunch.

“It used to be hard, but we’re used to it now,” she said about Bradford’s schedule. She is a nurse too but works locally.

They met in 2004 in high school, while she was at Trinity Episcopal High School and Bradford was at Adams County Christian School. They took time apart, while Bradford was in Iraq, and then reconnected after he came home.

Whitney picked Ella up and swung her around her hip. The family was ready to go home after lunch, for some time together before Bradford heads to his next nursing post.