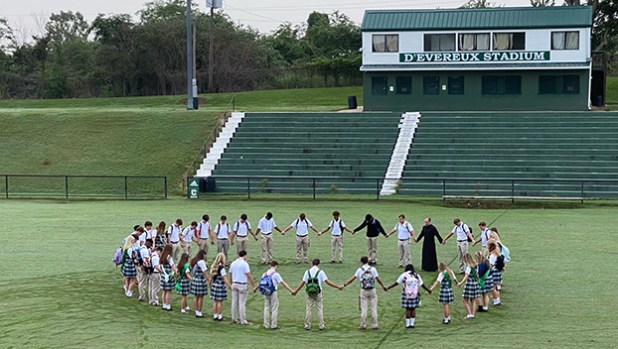 Seniors gather at the football stadium at 7 a.m. for prayer with Father Aaron Williams, rector and pastor of St. Mary Basilica. (Submitted) 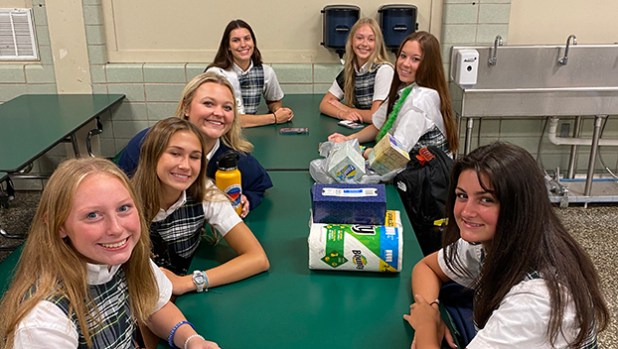 Students reunite with their friends on their first day back to school in Cathedral’s cafeteria. (Submitted) 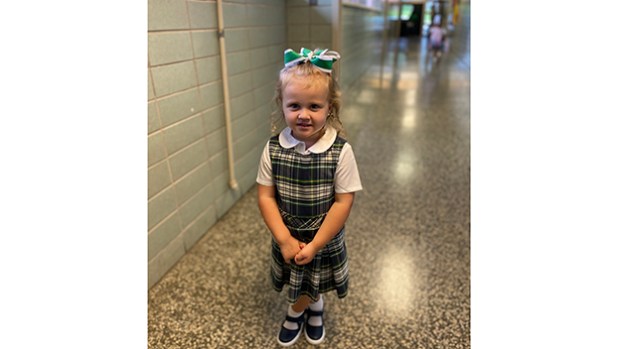 Charlie Martin wears a green and white bow for her first day of school at Cathedral. (Submitted) 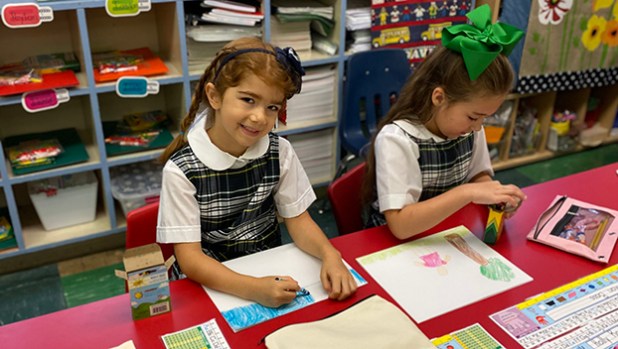 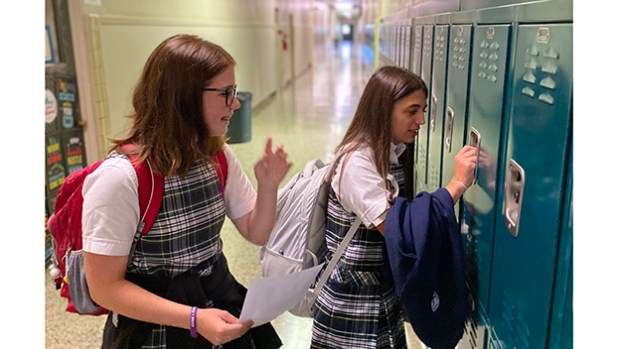 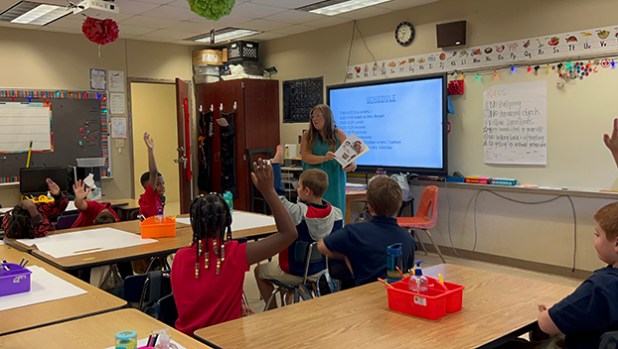 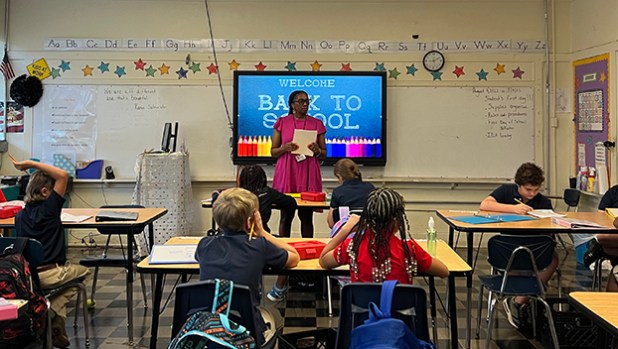 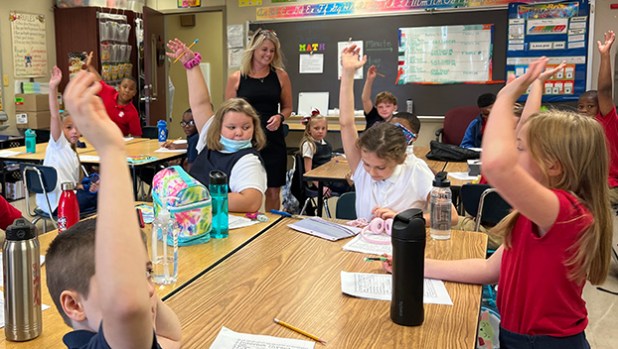 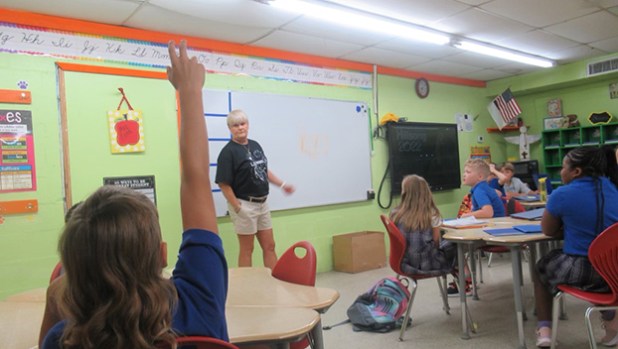 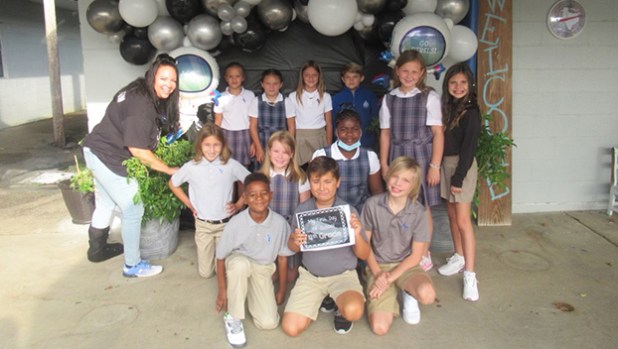 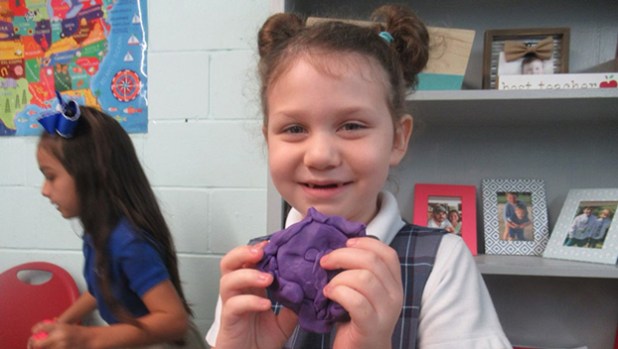 Aislynne Miller shows the "elephant-lion" she made out of Play-Doh in Holli Wadsworth's 2nd grade class at ACCS. (Maia Bronfman | The Natchez Democrat) 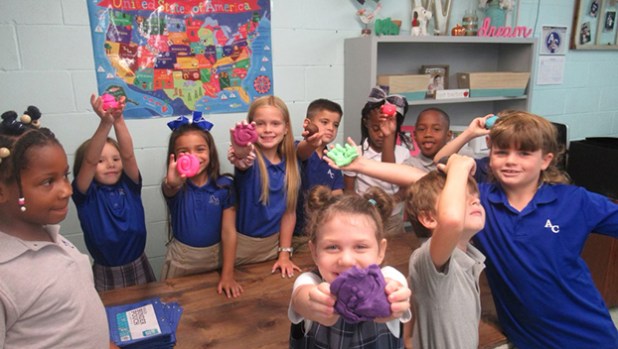 By MAIA BRONFMAN and SABRINA ROBERTSON
The Natchez Democrat

Seniors were the first on campus at 7 a.m. for the school’s traditional sunrise prayer service.

As the day progressed, the school was once again filled with sounds of pencils and crayons scratching paper, chatter in the hallways and school cafeteria and school lockers opening and closing—all signs that a new school year is surging full speed ahead for the Cathedral Green Wave.

The new school year began Thursday for Adams County Christian School and Concordia Parish public schools—minus Vidalia Lower Elementary which had to delay the start of school for a bat situation.

Electronic letters were sent out to parents of students at Vidalia Lower, stating the school would be closed Thursday “due to unforeseen circumstances.” School district superintendent Toyua Watson explained the school had to close so that “a bat issue” could be investigated.

“Can’t have bats around babies,” she said.

Karen Thomas, a 5th-grade math teacher new to Vidalia Upper this school year, already had her students working on math problems to discover what they know.

Likewise, Amanda Browning had her 5th-grade science students fill out a “Get to Know Me” worksheet asking them what they know about science and what science topics they would like to learn about this school year.

Before dismissal, Jessica Holland read to her 3rd grade ELA students. The book was called, “A Letter From Your Teacher on the First Day of School.” The book explains how she really feels about each of her students, she said.

At Adams County Christian School, students were greeted by a photo board they could pose in front of to celebrate their first day back from summer break. Brooke Newman’s kindergarten class also celebrated by making Play-Doh creations.

Aislynne Miller proudly smiled with two missing front teeth and held up an “elephant-lion” she made out her Play-Doh. In 4th grade, Nicole Gatson’s said her class would start the year off by getting to know one another.

“I’m not hit them with all of the rules at once,” she said. “The first day will just be getting to know each other. We want them to come back.”

ACCS Elementary School Principal Beth Guedon said this would be her first year in that role.

“Everyone has been so welcoming,” she said. “I’m glad to join the AC family. It’s an amazing group of parents and teachers.”

Wear tennis shoes, not cowboy boots, and give your teammates encouragement in kickball, she explained to the students.

Rustin Sanders interrupted her introduction to PE with a raised hand. He forgot his question at first when Hall pointed to him, then a minute later he remembered.

“Can we steal in whiffle ball?” he asked. Hall said no.