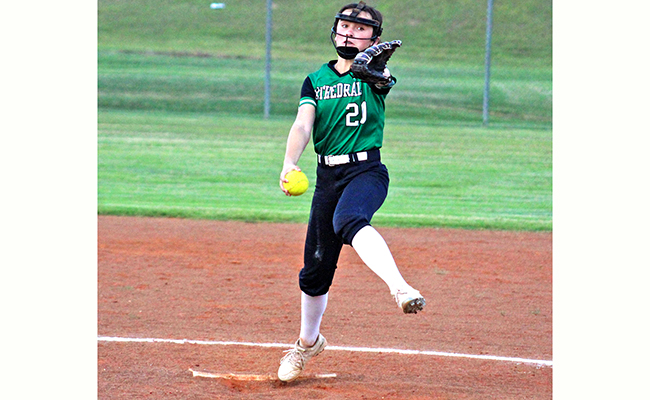 NATCHEZ — Cathedral High School’s varsity softball team was only able to get in one game last Saturday at the Cathedral Round Robin, but the Lady Green Wave did not disappoint the home fans as it defeated the Centreville Academy Lady Tigers 12-4 in a five-inning game.

The Lady Tigers tried to get back in the game after plating two runs off starting pitcher Marlie Hargon in the top of the third inning to make it an 8-3 game, but the Lady Green responded with four runs of its own in the bottom of the third to take a commanding 12-3 lead.

Centreville scored its final run of the game in the top of the fourth. The Lady Tigers were led at the plate by Rylee Shell, who went 3-for-3 with two doubles and two runs scored. Lexlea Sterling went 1-for-2 with one run batted in and one run scored.

Cathedral finished with 13 base hits and had five multiple hitters. Young and KG Fisher each went 3-for-3 with a double, one RBI and three runs scored. Fisher also had two stole bases. Hargon went 2-for-2 with a double and one RBI and allowed three runs, two of them earned, on four hits and three walks in three innings.

In another game at the Cathedral Round Robin, Centreville Academy finally earned its first win of the 2022 season as the Lady Tigers defeated the Porter’s Chapel Academy Lady Eagles 13-1 in an early afternoon contest. No other information on that game was available.