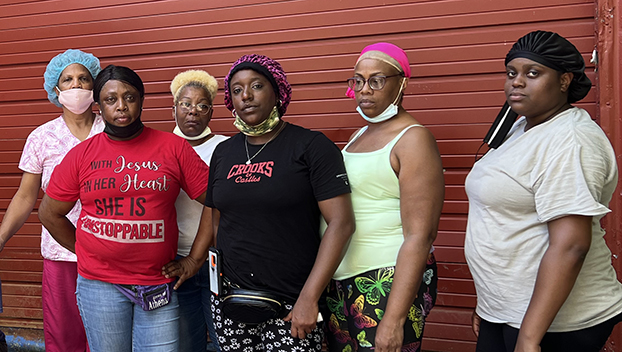 NATCHEZ — Six assembly line workers at Dutch Ann Foods Inc., a small frozen food factory located at 716 Liberty Road in Natchez, sat outside on buckets and lawn chairs instead of clocking in for work Monday.

The workers, who are not unionized, said they were on strike for unfair wages and discrimination.

Devonna Johnson said she started working at Dutch Ann on Jan. 30. She and all of the strikers work as “line workers.” They all have varying years of experience ranging from one day to 14 years, she said. However, they each are paid the same wage of $8.25 per hour — without holidays or medical benefits.

Sandra Goodin, the employee who has worked at Dutch Ann for 14 years, said she has had to purchase her own private medical insurance.

Mary Jones, an employee of Dutch Ann for six years, said the only raise she has ever received was during the COVID-19 pandemic when she and all other employees received a $1 pay bump for hazard pay.

McGowan said they started to strike when she and the other employees noticed a male coworker’s check stub sitting on the dashboard of his car in the employee parking lot.

She said the stub indicated he was paid a higher hourly rate and a paid holiday.

“We weren’t even here on the holiday that he got paid for,” McGowan said. “They paid him for a holiday that we all didn’t work. The owner will not come to talk to us. He won’t address us. He will not even come down here to try and hear us out.”

Dutch Ann is owned by Bill Jones, the owner and operator of Dozer Contractors. The manager of Dutch Ann referred all questions about the strike to the headquarters at Dozer, located at 14 Moran Road in Natchez, where Jones declined to take any interviews.

Jones has not responded to messages requesting comments for this story.