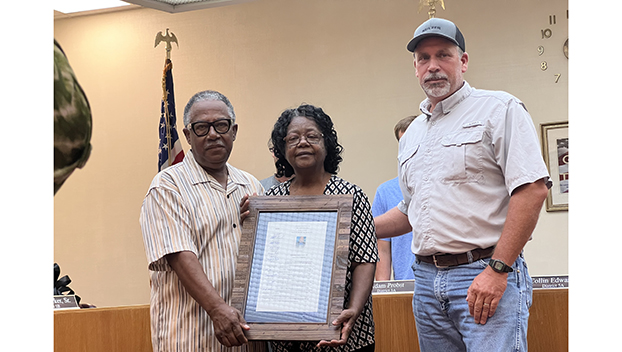 VIDALIA, La. — The first act of the Concordia Parish Police Jury during its Monday meeting was to present a resolution to the family of the late police juror Willie “Bill” Yearby, who died Aug. 1.

The police jury also appointed Yearby’s wife of more than 50 years, Marie Yearby, to fill his seat serving District 2 until the next police jury election in 2023.

When asked after the meeting how it feels to be taking his seat, Marie Yearby said, “Well, let’s see,” and walked over to the police jury table to take her seat.

Marie Yearby appeared small but confident sitting in the seat of her late husband, who himself was a large man both in stature and in personality.

“She has big shoes to fill,” said her daughter Carrie Schiele, adding, “I think she is going to do just fine.”

Fellow police juryman Joseph Parker Sr. choked back tears as he presented the resolution of respect to the Yearby family. He called on project director and former jury secretary and treasurer Sandi Burley to read it for him. She, too, swallowed tears a couple of times trying to read it.

“We were very close,” Parker said.

The proclamation states, “In recognition and profound appreciation of the distinguished service of Mr. Willie “Bill” Yearby, whereas on Aug. 1, 2022, the almighty God called Mr. Willie Yearby to his heavenly reward, whereas Mr. Willie Yearby was a lifelong resident and an outstanding citizen of Concordia Parish who faithfully served on the Police Jury’s board for more than two and one-half years and whereas he will be greatly missed by this police jury and the jury’s employees. He inspired his coworkers with his warm, friendly disposition, always smiling cheerfully and handling problems in his public servant’s work exceptionally well, and whereas his position as a hardworking board member in the vineyard will be hard to fill.

“We the members of the Concordia Parish Police Jury offer words of cheer and comfort to his family in this sad hour. As you are stepping into the days ahead we hope that precious memories made with him will give you the strength and courage to carry on.”

In addition to appointing a new police jury member, the board also appointed its next permanent jury secretary and treasurer, Ariella Carter. Carter is a resident of Vidalia who previously worked in a state office, said Interim Secretary and Treasurer Cathy Darden.

“I believe she is very capable,” Dardin said, adding she would stay for a couple of weeks to train Carter as her replacement.

Dardin was hired as the interim secretary and treasurer to replace Burley, who left the position when she accepted a new job with Syrah Resources in Vidalia. Burley continues to work part-time for the police jury as the project manager because of her extensive background knowledge of the ongoing projects in the parish.