Natchez mayor: Council members who leak info from executive sessions ‘will be prosecuted’ 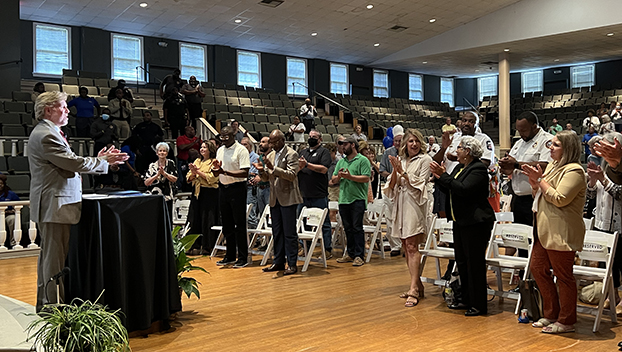 The audience gives applause at the conclusion of Natchez Mayor Dan Gibson's State of The City Address. (Sabrina Robertson | The Natchez Democrat)

Natchez Mayor Dan Gibson is threatening legal action against any member of the city council who shares information discussed during an executive session.

Gibson’s warnings came during Tuesday’s Board of Alderman meeting, during which the mayor cautioned “If it is found that any of you – in coming out of executive session –have shared with anyone outside of that room, it will be investigated and you will be prosecuted,” according to reports published by listenupyall.com.

Gibson’s said he was prompted to make the warning based on details of a recent closed-door meeting concerning personnel issues that had been disclosed to the public.

It is “despicable that anyone would willingly spread confidential information gained during discussion of personnel matters for the purposes of disparaging a person’s reputation for personal or political means – especially when mistruths are then spoken and spread,” Gibson told the news outlet.