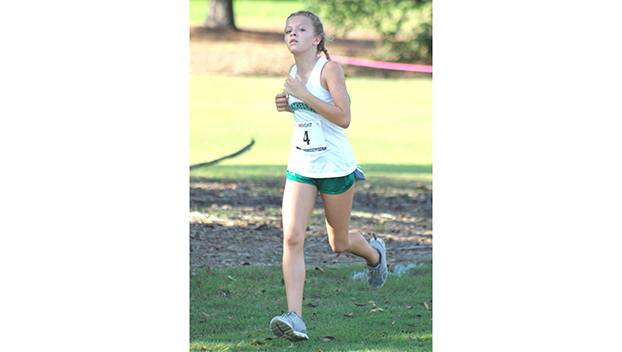 Adeline Burgett ran at Duncan Park last year in the Cathedral Invitational. Burgett returns to the cross country program and will not graduate until 2028. She is one of five solid runners for the Lady Green Wave.

NATCHEZ —Cathedral has worked hard over the summer to get ready for the season. Head Coach Tommy Smith said he saw great participation and a lot of young runners with his team.

Adeline Burgett, who will graduate in 2028, is one of the returning runners for Cathedral. She is joined by Molly Foster, Lizzy Verruchi, Lily Bertelsen and Allie Grace McGehee in making a strong girls team, Smith said.

“Allie has been running on her own. She is running up there with the boys and I think she will be a top 10 contender at state,” Smith said. “She has no fear of getting up there and mixing it up at the front. It looks like a good girls team and we could be in store for a good season.”

Barrett Burgett, Owen Bertlesen and Alex Monagahn have gotten stronger this summer and should be leading the pack. Barrett will be in his senior year for the Green Wave.

“It will be good competition for us and a chance to change up the competition,” he said. “The season is closing in and I love it. We have our twilight meet coming up. I’ve been coaching for 11 years and I still get excited for it. I still have the same thirst for the beginning of the season.”

Cathedral is running five days a week as they get ready for the three month long season. Smith said he is just excited for the season.

“The kids are ready. They know they have put in the work. I think the parents are ready too.”