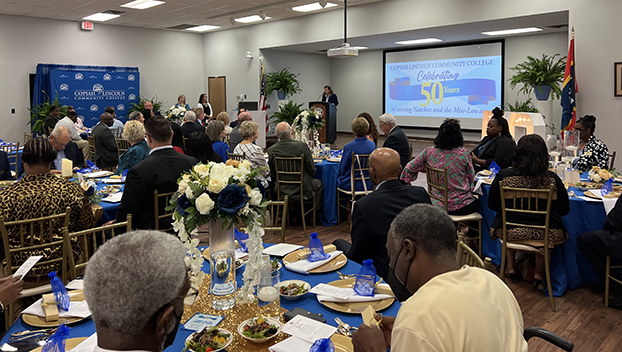 NATCHEZ — Copiah-Lincoln Community College celebrated the 50th anniversary of the establishment of the Natchez campus on Friday.

The main branch of Co-Lin was founded in 1958 in Wesson followed by Co-Lin Natchez in 1972, said Co-Lin President Jane Hulon Sims, Ph.D.

A special video highlighted the years of Co-Lin, since its early days renting buildings that belonged to the Natchez Adams School District, later moving to the existing campus off of Col. John Pitchford Parkway and creating the Tom Reed Academic Building and Redd Watkins Career Technical Center.

“This is really special to me because I go back right to 1972, a new graduate of the University of Southern Mississippi, come home to work in Natchez,” said Melton King, who is both the chairman of the Co-Lin’s Board of Trustees and a Natchez native. “It all began about that time when we started to review our higher education needs here. Now we look back and see it was all history.”

In 1990, the college hosted the first Natchez Literary and Cinema Celebration, an annual convention that attracts hundreds to the area to show Co-Lin is a “community college” in the sense of community involvement, said Carolyn Vance-Smith, who chaired the event for many years. Later on, the campus entered an agreement with Natchez Adams School District to provide an early college program to high schoolers.

In 2020, the U.S. News & World Report called Natchez Early College one of the nation’s “2020 Best High Schools” in the country and the No. 3 school in the state.

“As we look to the future, we continue to look for new ways to invest in our students, this campus and the Natchez community. We are so excited for the next 50 years of success here in Natchez,” Sims said.