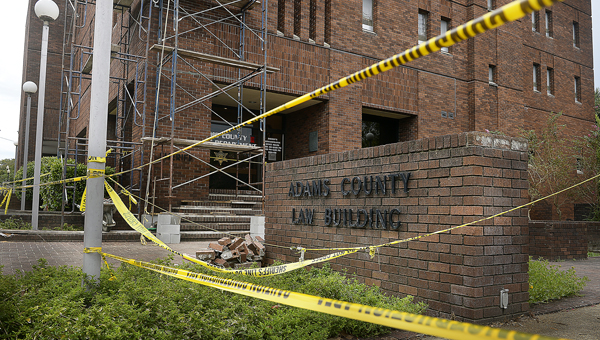 NATCHEZ — The Adams County Board of Supervisors is expected to vote at its next meeting as to whether to begin negotiations with the Concordia Parish Sheriff’s Office to house Adams County Jail inmates in its correctional facility.

Adams County Board of Supervisors President Wes Middleton has shared with each supervisor a price he received from Concordia Parish Sheriff David Hedrick, who operates a correctional facility as part of the his office.

When the idea of contracting with Concordia Parish to house Adams County inmates first came up several months ago, one concern was whether it would be legal to transport prisoners across state lines.

Middleton did not discuss specifics, but said, “It can happen.”

At Monday morning’s meeting, Middleton asked each supervisor to look over Hedrick’s proposal and be prepared to vote to begin negotiations at its next meeting at 9 a.m. on Aug. 29.

For years, county officials have been told the current Adams County Jail is substandard and not up to safely housing prisoners or jail staff.

“It’s not suitable. It’s not repairable,” Middleton said. “Due to the current state of the jail, I feel this is in the county’s best interest.”

The City of Natchez contracts with Adams County to house its inmates. He said he thinks those inmates would be included in those who would be housed in the Concordia Parish Sheriff’s facility if negotiations and legal details can be worked out.

“We are in a contract with the city. I don’t want to speak for the city, but I think they would continue with us. I don’t want to throw them out. I am a fan of the city and county working together. Anything we can do together makes sense,” he said.

“This talk (about the need for a new jail) has been going on since I was a kid. It’s time we think outside the box. I am not going to raise taxes 4 mills on Adams County residents to build a new jail. Economically, things are uncertain. Let’s sub it out and move on. If a year or two down the road, we don’t think this is working, we can do something else. But right now it’s time for us to do what is best for our citizens and move on to other issues,” Middleton said.

Adams County Sheriff Travis Patten said he commends the Board of Supervisors for trying to find a fix for the issues.

“Even with that said, we would still have employees who would have to work in those very same conditions,” he said. “That may be a temporary solution that supervisors choose, but there are lots of factors that go into transitioning from a jail of this size. You are talking Justice Court, County Court, Circuit Court and Chancery Court, not to mention the mental health cases we have going every day. “

Patten said he was surprised by the jail discussion at Monday’s meeting.

“I don’t want to be excluded from this conversation. We have many things to consider,” he said. “The board has openly communicated with me and I don’t see any reason that should change on this issue.”