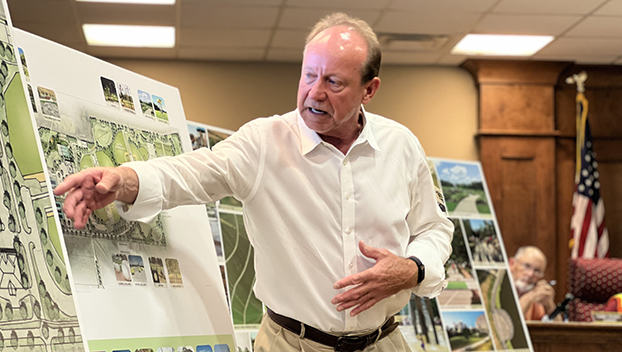 VIDALIA, La. — Vidalia officials hosted the first of two public meetings on Monday to discuss the use of hydroelectric royalties from the Sidney A. Murray Jr. Hydroelectric Station, from which the town buys its power.

The second public meeting is scheduled for 6 p.m. on Monday, Aug. 22, at Vidalia Town Hall.

While the hydroelectric station was the brainchild of former Vidalia mayor Sidney Murray Jr., the town does not own it. It would take a number of investments from several corporations to bring it to fruition. Before the hydroelectric station turned on in August of 1990, the Town of Vidalia reached an agreement with Catalyst Energy Corporation, one of the project’s main investors. Catalyst would own the plant with Vidalia remaining a co-licensee. In 2030, the town will have the option to buy back the $550 million station for $1,000. Additionally, Vidalia receives royalties from the plant equal to 6 percent of the plant’s gross revenues from the sale of its power, per the agreement.

Vidalia Mayor Buz Craft said he didn’t have an exact amount of how much revenue the town would be receiving from the hydroelectric plant at this point. However, he did say the town is looking at around $22 million in revenue this year.

“It’s enough to do everything we’ve talked about tonight,” Craft said.

Some of this would be used to pay off municipal debts on Vidalia’s electric substation, the existing recreation complex near the Vidalia municipal buildings and a new fire truck.

“We could save half a million in interest every year if we pay off our municipal debt. … The town would be out of debt completely,” Craft said.

Another use is to renovate the Council on Aging and Masonic Lodge No. 305 building.

“It’s a very used building, a very prominent building in the town and it’s a historic building,” Craft said. “It is in bad need of repair and renovations and I would like for us to get estimates on what it would take to renovate it. Our senior citizens deserve to have a nice place to go and do activities.”

Another plan for the funds is to finish Polk Park, located in the area beside the municipal complex. Bryant Hammett of Bryant Hammett & Associates LLC based in Ferriday, Louisiana, presented a concept for the Polk Park project at Monday’s meeting.

The concept proposed includes enhancing the area around the Vidalia pond by adding a water feature and pavilions around it, adding an additional pier and beaches.

Another use for the funds that Craft proposed includes offering up to $500,000 to the Concordia Parish School Board for turf on the Vidalia High School football field.

He also requested safety improvements to the baseball fields in the recreation complex.

These projects would come in addition to delivering rebates worth up to half of the town’s utility customers’ bills.

Alderman Tommy Probst said he was against paying for projects on the school district’s property. “That should be their responsibility,” he said.

He added the safety of the baseball fields should also be the responsibility of the recreation board.

“Somebody has got a problem and I don’t think it’s us. It’s the recreation board,” he said.

Probst also asked that some of the funds be used for trimming trees along the town’s electric grid to possibly prevent future outages from fallen trees and tree branches.

While fully supportive of the Polk Park project, Alderman Jon Betts said the town should first, “alleviate our debt as much as possible.”

“I don’t mean to be a naysayer but I believe this inflation is going to turn into a recession. The more of our debt that we have paid off, the better shape we will be in,” Betts said.

Alderman Robert Gardener said he would like to see the town give more funding to the summer youth program, which currently the town pays $4,200 toward. Gardner said he’d like to see the fund increased to $5,000. Gardner said he’d also like the town to pay for insurance for the annual Memorial Day parade and to see if it would be feasible to add sidewalks from Riverside Street to Alabama Street and from Alabama Street to Spruce Street.

Vidalia Ordinance No. 588 sets priorities for how royalties from the hydroelectric fund are to be spent. It allows the city to spend hydroelectric royalties “for any lawful purpose” after satisfying certain conditions.

These conditions include that the mayor and board of aldermen annually compile a schedule of projects on which the funds will be spent, have it published and the public notified that the details are available for inspection. That inspection includes, per the ordinance, two public hearings to discuss the proposed projects and receive public input about possible alternative uses of the funds.

After the public hearings, the aldermen have to approve the expenditures for projects “deemed to be in the best public interest.”

Members of the Vidalia Beautification Committee had desires of their own.

Ellen Yates, the committee’s president, told officials of their plan to add 30 decorative light poles throughout the town. These have been ordered and should arrive later this month, Yates said. Eight of the poles would be placed around the square in front of the old courthouse and poles would alternate with decorative banners and hanging flower baskets leading from the old courthouse to the Vidalia Riverfront and along Martin Luther King and Clinton Street to the riverfront.

During Christmastime, these poles would be decorated with lighted wreaths, she said.

“We’d like to see the riverfront glow at Christmas,” she said.

Yates also said she would like to see the town and local businesses support adding poles and Christmas decorations in front of their properties so that they could be placed throughout the town.