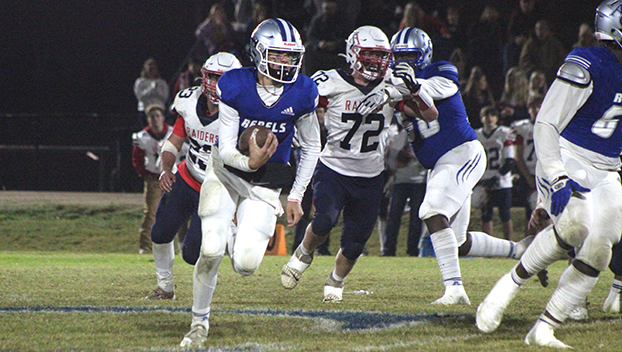 Coleman Carter threw for over 2,375 yards and 22 touchdowns his freshman season at quarterback for the Adams County Christian School Rebels. (Hunter Cloud | The Natchez Democrat)

NATCHEZ — The Adams County Christian School Rebels varsity football team will get their season underway Friday night when they travel to Brookhaven to take on the Brookhaven Academy Cougars.

This will be a rematch of last year’s game that took place at Bobby Marks Stadium on the ACCS campus. The Rebels came away with a 46-21 victory over the Cougars in what was then-freshman Coleman Carter’s first start at quarterback on the varsity team.

Hopefully for the Rebels, Carter, now a sophomore, will have more of the same success against the Cougars he had last year.

Kickoff between the ACCS Rebels and the Brookhaven Academy Cougars is scheduled for 7 p.m.