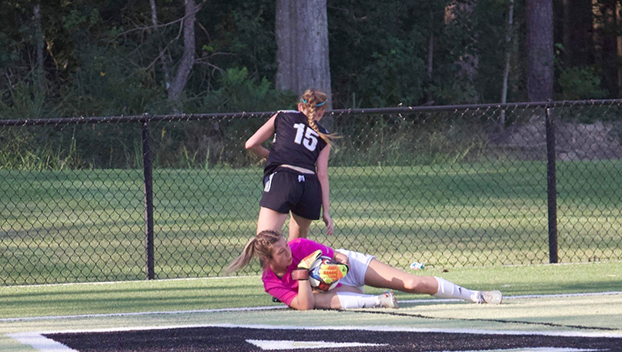 Paige Switzer makes a save against Oak Forest in a match Monday afternoon. AC lost 4-0 but she has steadily grown in goal and her coaches have confidence in her. (Alicia Jordan Switzer | Rebel Athletics)

NATCHEZ — The Rebels soccer team is starting to come together. They had a huge win over Parklane Academy last Saturday at home with two goals turned in by McKenzie Campbell. Her sister Maddie was the Rebel’s leading goal scorer last season.

AC traveled to Oak Forest on Monday on short rest and lost a hard fought match 4-0. AC Coach Leigh Mcilwain said she was not sure what went wrong for the Rebels at Amite City.

“They played well in the first half but in the second half we didn’t. A lot of our problems stemmed from not passing the ball and the girls had gotten gassed out,” Mcilwain said. “I think they were tired and were not talking. They didn’t play the game like they did Saturday against Parklane.”

AC four seniors and two juniors this year and the rest of the starting 11 is made up of seventh to ninth graders. Those young rebels are impressing the coaches with their efforts, Mcilwain said. Coaches are encouraging them to do their best and carry confidence into their game.

Former AC player Cristofer Thompson has volunteered his time as a coach personally working with the squad in training and practices. He said the team’s overall skill has improved since the start of the season. Things are starting to come together for the team as he sees growth every single game.

He said the game against Oak Forest did not go their way and they are hitting the practice field this week to prepare for the next game. Ironically, AC plays the Yellow Jackets on Saturday at ACCS with kickoff at 5 p.m. The AC tournament was canceled, he said.

It will be a challenge for Oak Forest to beat the Rebels twice because they have realized their mistakes. He said hopefully they will fix the mistakes with communication and passes and do the little things right this week.

AC has had several younger players step up but the biggest leader of the team is first year goalkeeper Paige Switzer, Thompson and Mcilwain said. Before this season, she had played soccer for a few years but never goalkeeper.

The coaches threw her into practice and games and she dominated the position, Mcilwain said.

“She was nervous at first but has gotten out there and saved so many shots,” she said. “Every game she is getting better and better and gaining confidence. We are proud of her and proud of everyone on this team.”

Thompson described her as a “lockdown” goalkeeper. Switzer has gained his trust and he knows she will do a good job in goal each game.

“She has a great personality and she wants whatever is best for the team. I know she will bring the most for the team,” Thompson said. “I couldn’t be happier to have anyone back there at goalie. We are working day by day and she is becoming more confident. We can really rely on her.”

AC has shown growth in the way they play as a team in games and how they approach practices. The Rebels show up on time to practice and are showing up early. Thompson said they are getting through their drills early which is important because their practice schedule is planned out and timed.

AC believes in what they are doing this season. He said the girls go into games believing they can win and it makes them “dangerous.”

Thompson is a former Alcorn State kicker who entered the transfer portal this spring. He has one more year of eligibility and is still waiting on a phone call to finish his college career. In the meantime, he said he hopes his experience is a good example for the Rebels.

“I’m waiting on that phone call before I put on this coaching whistle,” he said. “I still lift, run and kick before practices. I know at some point the phone will ring for me. I want to play college football one more year. The girls are learning to stick with it and stay persistent like I am persistent with finding a new home for my last year of college football. They are learning to be persistent and it carries over into drills in practices and games. I feel like it is one reason they believe.”