MRA tears through the air to win over Cathedral 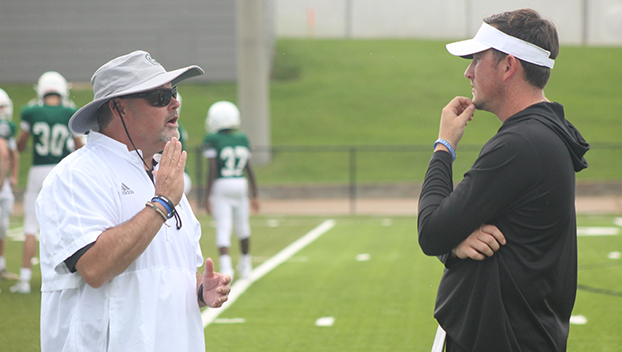 MADISON — The opening kickoff being delayed for 30 minutes due to lightning was about the only thing that could slow down the Madison-Ridgeland Academy Patriots Friday night as they played host to the Cathedral High School Green Wave.

White threw touchdown passes of 23 and 46 yards to Ben Horner and an eight-yard touchdown pass to Charles Simpson II as the Patriots (2-0) jumped out to a 22-0 lead by the end of the opening quarter.

Cathedral had its chances to put points on the board a couple of times in the first quarter, but negative plays and penalties ended those precious opportunities to keep the Green Wave in the ball game.

“I really thought we played hard. We saw a lot of improvement from what we saw last year,” Cathedral head football coach Chuck Darbonne said. “We made some mental mistakes on offense, defense and special teams that allowed them to score quickly. We missed out one some opportunities because of penalties. We got in our own way a lot, especially on offense. A lot of pre-snap penalties, Mental mistakes cost us. It’s something that we can correct.”

Green Wave senior quarterback Noah Russ was under heavy pressure from a stingy Patriots defense. While he had some success throwing the ball, he was sacked a few times and was hurried even more.

With MRA leading 44-0 and a running clock going for much of the fourth quarter, Cathedral finally scored on a 24-yard run by Jake Maples with nearly two minutes remaining.

“We played pretty well. Jake scored our touchdown running the ball. There are a lot of positives coming out of the game on offense and defense,” Darbonne said. “We had more success against them this year than we did last year. We played with a lot of confidence.”

Cathedral (0-1) plays host to St. Joseph Madison next Friday with kickoff at 7 p.m.