Rebels rebound to victory over Cougars 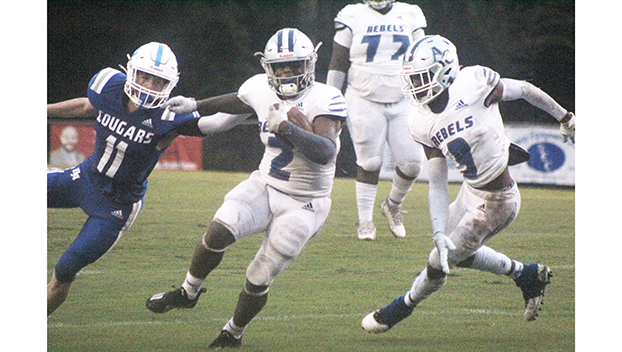 Terrell Tenner breaks a tackle as he goes on a 51 yard touchdown run to tie the game in the second quarter for AC. (Hunter Cloud | The Natchez Democrat)

BROOKHAVEN —Brookhaven Academy struck first on Friday, as the defense forced a punt and recovered a fumble early against Adams County Christian School.

Cougar Quarterback Elijah Helton helicoptered into the endzone on a two-yard sweep with 6:25 left in the first quarter, giving BA the first score.

Eight minutes later AC’s Terrell Tenner broke on a 51-yard touchdown run to tie the game at 7-7, starting a rebound that led to a 27-14 win for ACCS

“I just worked my way towards the end zone. I had to break a few tackles,” Tenner said of the breakout touchdown. “Instincts kicked in for me. I wish I could have scored more, but I got hurt.”

Tenne’s rolled his ankle in the second half, forcing him to sit out the rest of the game.

AC would add another touchdown about two minutes later on a 30-yard touchdown reception by Jordan Berry. He caught a screen pass and slipped past the BA defense to give the Rebels a 13-7 lead with 8:35 left in the second quarter.

Tenner said he was nervous after the first quarter but they turned things around.

“I thought we were going to lose because we started off so slow,” Tenner said. “I’m glad we got it together and were able to bounce back.”

Defender Jessie Grayson said he thought the turning point on defense came when they started to slow the pace of the game. AC was able to pick up a stop or two, pinning BA back and putting  pressure on the quarterback.

“We just have to get our alignment right,” Grayson said. “It takes one play at a time.”

AC almost let the game get too close towards the end. With 1:30 left in the third quarter, Trevor Fortenberry returned a punt for 92 yards and a touchdown to put BA within 7 points.

Berry took the ensuing kickoff 55-yards and Carter led the Rebels on a 25-yard drive to answer. He used his legs to muscle in for a 4-yard score to make it 27-14 with 10:37 in the fourth quarter.

BA started a drive down the field, helped by penalties from AC. The Rebels had at least two unsportsmanlike penalties called on the drive as Helton lined up in shotgun at the 30.

He stepped back and threw a deep pass into the endzone but it never reached its target. Senior Samuel Merriett leapt and caught the ball for an interception in the endzone.

“It was the dagger. I pictured the moment in my head before the snap,” Merriett said. “I just read the quarterback’s eyes and drifted to where he was looking to pick him off … we had way too many penalties. We will work on that this week. A lot of it is self control and we have a lot of work to do.”

AC’s win against BA extends their streak against the Cougars. “They came out hard because we have beaten them the past 10 years,” Merriett said. “This is their super bowl. Coach King told us that. I think everything from here is up.”