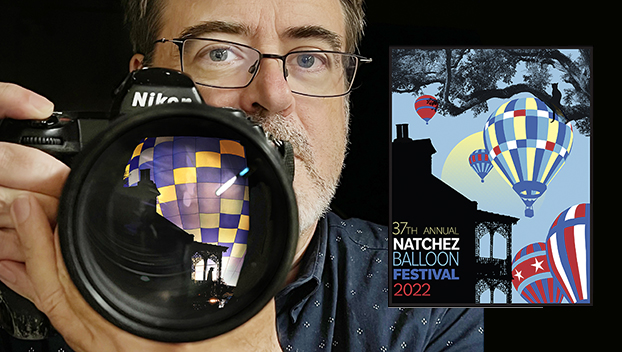 The photo of the Bontura house which inspired this year’s artwork for the Natchez Balloon Festival is reflected on the lens of Ben Hillyer’s camera. (Staff photo | The Natchez Democrat)

NATCHEZ — A moment of beauty during the dark days of the COVID-19 pandemic inspired the artwork for the 37th annual Natchez Balloon Festival.

Ben Hillyer has covered 21 balloon festivals for The Natchez Democrat since he first joined the newspaper as a photographer in 2000. However, 2020 was like no other year.

The Natchez Balloon Festival would still take place, but without the festival part.

Instead, more than 30 hot air balloons scattered throughout the Miss Lou for an evening balloon glow. One night, many pilots would not inflate their balloons to glow because it was windy, but a few did. One was Kurt Vitense, who participated in the glow in a grassy field beside Pig Out Inn on Broadway Street.

Hillyer saw the silhouette of a masked man standing alone on the front porch of Bontura, one of Natchez’s many historic houses, and the balloon lit the night sky behind him.

Seeing his opportunity, Hillyer waited for the perfect shot.

“I got a lot of positive response from that,” Hillyer said. “Many people said, ‘You should turn that into a poster for balloon race.’ The next year came around and I decided that is what I was going to do. I was going to take that photograph and turn it into a poster.”

In 2022, no one wants to be reminded of COVID-19, Hillyer said. He made more than a few changes to the original photo, piecing ideas together like a jigsaw puzzle. He played with the silhouettes on the balcony, at first swapping the masked man in solitude with a father and son. Then he took away the silhouettes altogether leaving only the balcony.

The Bontura poster did not win the 2021 art contest, but Hillyer used the same idea in the 2022 competition with some adjustments.

He added the branch of a live oak tree stretching out across the top of the scene. Something was missing in those branches. Perhaps a bird? A bird wouldn’t be big enough for the space, so Hillyer decided a cat could sit there and watch balloons flying in the distance.

“The Natchez Balloon Festival is thrilled to announce Ben Hillyer as the winner of this year’s artwork competition,” said Carter Burns, Executive Director of the Historic Natchez Foundation. “The Natchez Balloon Festival Committee was impressed with the creativity of all the submissions that were received and wants to thank everyone who participated in the competition.”

Hillyer’s artwork will be available to purchase on a poster or a T-shirt during this year’s balloon festival, which will take place Oct. 14 through 16 at Rosalie. Burns said the T-shirts and posters should be available to order by mid-September.

This makes Hillyer’s third time winning the balloon festival art competition. He won the first time he entered the contest in 2013 with a piece inspired by balloons flying over the bluff on Clifton Avenue. The second time he won in 2017, Hillyer put together a colorful scene featuring balloons flying over the shape of famous buildings on the Natchez skyline, including St. Mary Basilica.

A native of Alabama, Hillyer said he first became interested in photography at age six or seven. His grandparents gave him his first camera, a KODAK with a 110 film cartridge and a detachable flash bulb on top.

“My grandparents were both creative and artistic people,” Hillyer said. “My grandmother was a weaver and my grandfather was a woodworker and they exhibited their stuff at galleries in North Carolina.”

He graduated from Mississippi State University’s School of Architecture and worked in that field for nearly a decade before joining The Democrat as a staff photographer in 2000.

Since then, he has held numerous positions with the newspaper, including creative director and news editor and in 2020 entered the newly-created role of digital engagement leader for Boone Newspapers Inc., the parent company of The Democrat.

Hillyer has won numerous state and regional awards for photography, design and writing.

In addition to his newspaper work, he’s an accomplished artist and photographer who has had his work featured in galleries nationally. He has been twice exhibited at the Mississippi Museum of Art at their bi-annual invitational and regularly participates in photo festivals in Mississippi, Georgia and Alabama, he said.