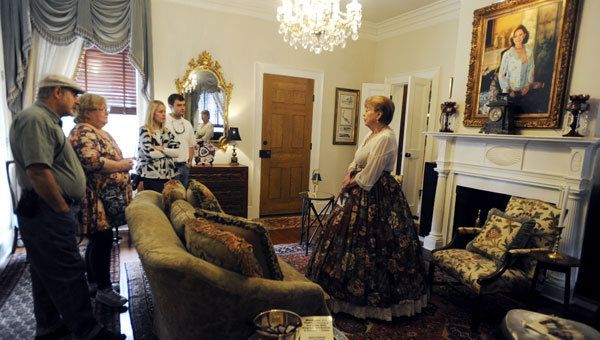 Peggy Sandhill, right, portrays Immaya Hoka, wife of Chief Pushmataha of the Choctaw Nation, to tour-goers as they travel through Gov. Holmes House during Spring Pilgrimage in 2012. (Democrat file photo)

NATCHEZ — The Gov. Holmes House, built in 1794 and one of the oldest structures in Mississippi, has new owners.

Michael and Eugenie Cates have sold the house at 207 S. Wall St., to Gene and Mary Lou Perkins of New Roads, Louisiana.

The Cates lived in and loved the Gov. Holmes House for 20 years. The home wasn’t on the market, but the Cateses received a cash offer for it and decided to sell.

“Several times through the years, my real estate buddies have called and asked to have a one time showing, and this was one of those situations,” Michael Cates said. “Patti Sanders, who is a buddy of mine, called me up and asked if I had any ideas, any leads on a historic property downtown that might interest her client. I told her ‘no, I really don’t,’ but ad-libbed and said, ‘Gov. Holmes is always available to show,’ and I kind of laughed it off.

“Later she called and said they would like to see the house,” Cates said. “We shoved stuff in the closets and loaded the dishwasher and took off. Seems like maybe a few hours later, Patti called me and said, ‘I have an offer for you.’ ”

The Cateses discussed the offer and decided to accept.

“With the economy and things, we looked at the situation and realized we probably would not get another offer like this anytime soon. Our daughter is grown and it’s just my wife and myself. Like all historic properties, it’s a chore. So, we decided ‘let’s do this’,” he said.

One of the contingencies was the Cateses had to move quickly. The Perkins had renovated and sold a house at 54 Magnolia Bluffs. They were living in that house and needed to be out within 30 days.

The Cateses also own a house with 10 acres on Dunbar Road in Elgin Plantation, which they have owned for 10 years. They have moved into that house.

“That house was always our Plan B. We are going to make improvements to its and maybe in a couple of years, we will flip it and come back into town,” Cates said.

“I love the Gov. Holmes House. It was really my house, and there are lots of stories behind why,” he said. “We never put it on the market, but this popped up at a very unique time. We are very happy about Gene and Mary Lou buying it. She just seems thrilled with it. We moved first and they are moving now. I’m sure she’s neck deep in boxes, but she seems to have such a good attitude about the house.”

Mrs. Perkins said she knew immediately the Gov. Holmes House was the home she had been seeking.

“The house wasn’t even on the market,” Mrs. Perkins said. “I give all the credit to my realtor, Patti Sanders. She worked so hard with us every day to find something, and it wasn’t happening. She stopped by and said, ‘Look at this house.’ I said, ‘Oh, my!’ And we bought it that night.

“It’s just so perfect. It was so well done. The previous owners did a magnificent job. I hope eventually I will be able to open it up for tours,” she said.

The Perkinses owned and operated a bed and breakfast and tour home at Mon Coeur Plantation in Louisiana.

“We wanted to get in town. We have never lived in town,” Mrs. Perkins said. “I just fell in love with the house.”

The Gov. Holmes House was owned by David Holmes, who was the fourth governor of the Mississippi Territory, serving from 1809 through 1816. Holmes was first governor of Mississippi when it became a state in December 1817.