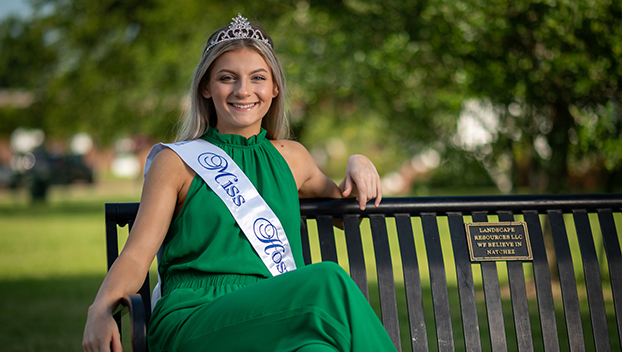 NATCHEZ — Anna Simmons, the daughter of Rachel and Sean Simmons, was never the pageant-going type before last spring when she interviewed with half a dozen other girls to discover who would become the next Miss Hospitality Natchez.

Simmons, who graduated from Cathedral High School in May, said the pageant board spoke to senior girls at her school to see who might be interested.

The initial interview for Miss Hospitality Natchez was three hours long and the winner was decided the same night, Simmons said.

When the winner was announced, Simmons said she was “excited but nervous” at the news.  She knew she would have to get to work right away to prepare for the state pageant.

“It was strange because I’d never done a pageant before,” Simmons said. “I was going in not knowing what to expect so I treated it like a job interview. It was kind of fun. The ladies who interviewed me were great and made it as least stressful as possible. I think it gave me a lot of skills to prepare me for future job interviews.”

The pageant is for young women between the of ages 18 and 24.

Simmons was one of the youngest to participate in the state pageant in Hattiesburg last month, which consisted of a week of practice and preparation before the actual competitions, she said.

“To be so young and be in a position to promote the oldest city on the Mississippi River to me is a big deal,” she said. “I was really nervous … but this was something I was glad I got to experience. Every girl there was incredible. It was a gathering of the brightest and best in Mississippi and I didn’t meet a single person that was not a smiling face and ready to help. It was a life-changing experience for me. I got to meet people from places all over the state that I didn’t even know existed and met a lot of people I feel like I will be friends with for the rest of my life.”

Simmons now attends the University of Mississippi, where she is majoring in forensic chemistry and plans to attend medical school to become a forensic pathologist.

Her inspiration comes from her grandfather, Dr. John Lewis, who worked at the Mississippi Forensic Laboratory in Pearl.

While many in the same field might take higher-paying jobs in other states, Simmons—like her grandfather—wants to use her education to help her home state in an area that is much needed, she said.

Simmons said she decided to compete for Miss Hospitality because, while she has lived in a lot of other places, Natchez has always felt like home.

“I left this summer for Europe for two weeks and it just doesn’t compare,” she said. “As someone who has traveled and has lived in a bunch of different places with a bunch of different types of people, there is no place like Natchez. It is such a melting pot of cultures, religions and people that I don’t think people get as much of anywhere else.”

As Natchez Miss Hospitality, Simmons is launching a social media platform called “Miss Hospitality Natchez” that she hopes the next young lady to have the title will inherit and keep it going.

“To me, hospitality is the promotion of a place you love,” she said. “It is the ability to draw others to somewhere without being overwhelming and to express how you feel about a place in a way that is desirable. My goal is to promote economic development in Natchez and the state as a whole to the rest of the nation.”

Simmons has been a member of Cathedral High School’s dance team, was a peer ministry leader of St. Mary Basilica’s Catholic Youth Organization, a member of the Cathedral High School varsity track team and danced at the Middleton School of Dance. Her other hobbies include hiking, paddle boarding, traveling and any outdoor activity as well as journaling about her life experiences.

Simmons will appear, with crown and sash, at several upcoming Natchez events including upcoming music festivals this fall.