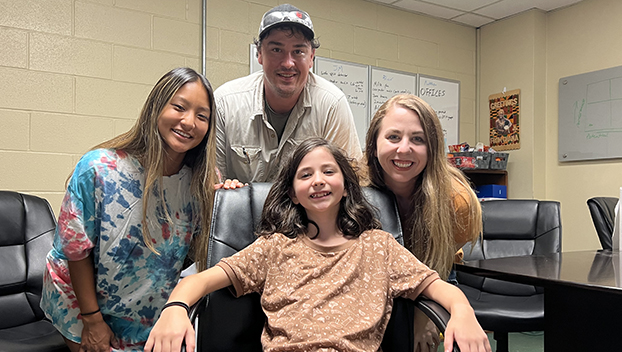 Pictured seated is Andi Cooley with her aunt and parents Madi Cooley, Trey Cooley and Taylor Cooley standing behind her. Andi Cooley, a fourth grader at Concordia Parish Academy, scored all Advanced on her LEAP test and a perfect score in English Language Arts. (Sabrina Robertson | The Natchez Democrat)

VIDALIA, La. — Nine-year-old Andi Cooley said she isn’t sure yet what she wants to be when she grows up, but there are limitless possibilities.

Cooley, the daughter of Taylor and Trey Cooley, is well on the way to greatness academically.

“She asks her teachers for extra homework,” Taylor Cooley said.

As a third grader, Cooley scored perfectly on the English Language Arts portion of the LEAP test and Advanced, which is the highest-scoring level, in all subject areas.

The average score for the school district on the ELA test is 725 points of a possible 850 points. The average for the State of Louisiana is 736 points.

Cooley got her test results Friday and saw that she scored 850.

“I’m super excited. It was kind of hard, some of the questions. I honestly didn’t expect to get a perfect score. … I’m so happy about that,” Cooley said.

Cooley also was permitted by her school to skip a grade in her math lessons. Last year she was taking fourth-grade math and is also reading at a sixth-grade level.

“In Harry Potter and I’m on the second book right now,” she said. Her favorite series so far is “The Land of Stories” by Chris Colfer, Cooley said.

“There are six books and I’ve finished all of them. The biggest one has 517 pages,” she said.

Cooley memorized the number of pages in all of the books she has read.

In her spare time, when Cooley isn’t doing the extra homework that she asked for, she enjoys playing soccer, drawing, making arts and crafts and graphic design. Cooley uses the Picsart app on her computer at home to draw and let her imagination take her anywhere she wants to be, whether it’s in a teacup, in a submarine at the bottom of the ocean or saving the world as a superhero with the power to control lighting.

She makes “paper squishes,” a craft that entails coloring and cutting out paper and stuffing it with pillow stuffing to make three-dimensional art, to sell online.

Cooley also enjoys theater. Last summer, she performed multiple roles in her first play, “James and the Giant Peach,” at Natchez Little Theatre, including a butterfly, a seagull, a Hollywood agent and Karl Kreatour who yells, “Look out, there’s a rhino!” in James’ nightmare, Cooley said. She is currently working on a comic book, staring herself and her friends as rich women who suddenly realize what it’s like not to be rich when they are cursed by a genie.

Her biggest role models, Cooley said, are her parents.

Cooley said she also loves all of her teachers and attributed her success on the test to them.