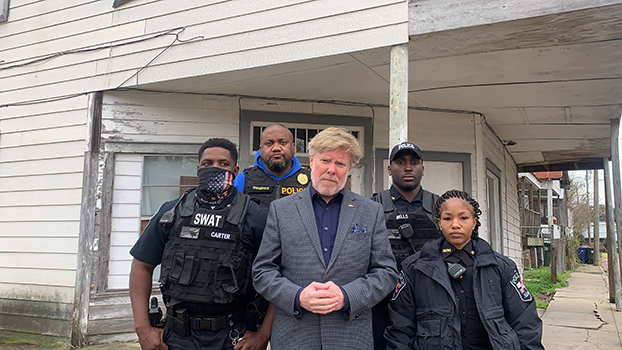 Natchez Mayor Dan Gibson stands with members of the Natchez Police Department during a live video discussing how he plans to address crime in one of the problem areas of the city in January.. (Hunter Cloud | The Natchez Democrat)

NATCHEZ — Natchez Mayor Dan Gibson said the Natchez Police Department is “on top” of the early morning incident involving gunfire in one of Natchez’s quietest subdivisions.

He also urged Natchez residents this November to vote for judges they know will be tough on crime.

“I want to share with you how concerned we are,” Gibson said Monday morning. “This is not something that should happen to anyone. Just as we proactively attacked this situation when it happened to someone else in January, we are on top of this one. It is outrageous that anyone in Natchez should not feel safe in their own home.”

A resident of Woodhaven subdivision confronted a man walking in his driveway at about 2:35 a.m. Monday morning. The man fled to a car that was apparently waiting from him and fired three shots at the man while driving away. At least one of those bullets entered the man’s home.

No one was injured.

“We are very grateful for the cooperation of neighbors who are already sharing video with the police,” Gibson said.

He took the opportunity to urge citizens to vote for judicial candidates who are tough on crime.

“In a time where crime if effecting people all across our country, and with judicial elections coming up here this November, I want to urge all citizens who care to elect only judges who are not afraid to put criminals in jail and keep them there,” Gibson said.

“Nine times out of 10, we are finding that crime is being committed by repeat offenders. And I have to ask why that is. Why are bonds so low and why do some judges seem more concerned about the criminal than they are about the victim?” he asked.

He said some judges are working against law enforcement.

“We are working too hard to solve crime, too hard to make this city safe for someone to undermine our efforts by releasing people as quickly as we can arrest them,” Gibson said. “I am angry this morning. That could have been me or you or a child or anyone else and it must stop.”