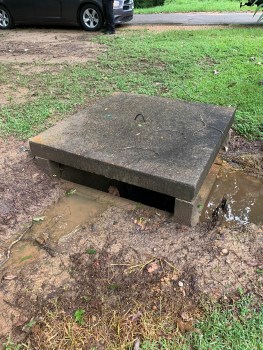 Young puppy can be seen inside this storm drain in Kingston. (Submitted) 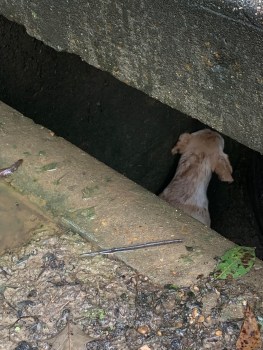 A closer look at the scared puppy stuck inside the storm drain in Kingston. (Submitted) 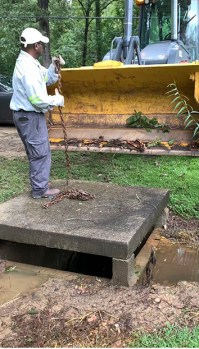 A member of the Adams County road crew prepares to lift the concrete top off of this storm drain in the Kingston community to aid in the rescue of a young puppy trapped in the drain. (Submitted) 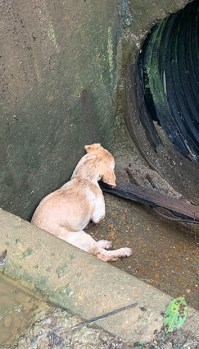 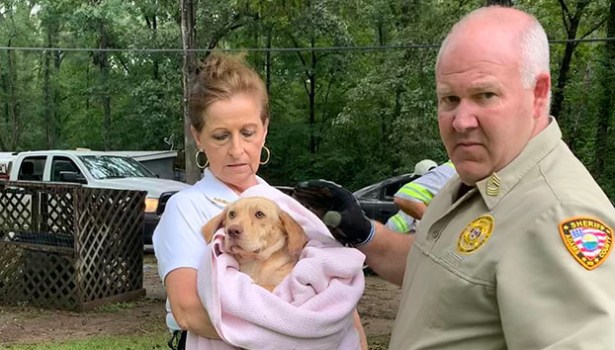 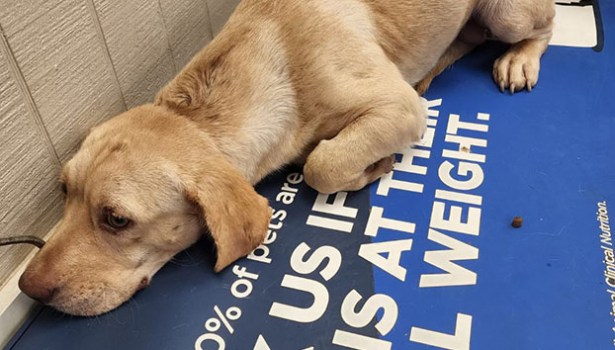 King is weighed at the Southside Veterinary Clinic, where he is recuperating. (Submitted) 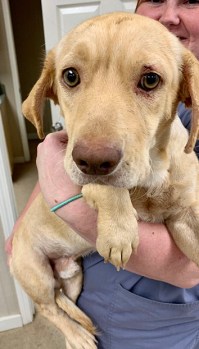 King after his rescue. (Submitted)

NATCHEZ — A lucky young puppy is recuperating today at the Southside Veterinary Clinic, thanks to the Adams County Sheriff’s Office and animal rescuers Linda Kennon and Jessi Knight Credle.

A woman who lives on Magnolia Acres Road in the Kingston community called 911 on Monday, reporting she was hearing a puppy crying from inside the storm drain.

The puppy apparently had been caught in the drain system for several days.

“She said she thought she heard crying last week, but couldn’t tell where it was coming from,” said Karren Holland Ewing, Adams County Sheriff’s deputy.

Monday, the woman went to her mailbox and heard the crying again. This time, the puppy’s crying was more insistent and consistent.

“The puppy was down in the storm drain, which was covered in a concrete slab,” Ewing said.

ACSO Master Sgt. David Nations called county road crews, who showed up with a backhoe to help move the concrete slab from on top of the drain.

Kennon and Credle responded to the scene with a ladder, food and a blanket to use once the puppy was rescued.

Once the concrete was removed, Nations used the ladder to climb down into the drain and retrieve a scared, wet and hungry puppy, which was covered in ticks and fleas, Ewing said.

While down in the drain, an army of fire ants, which “tore him up,” attacked Nations she said. However, he successfully rescued the puppy, which is being called King in honor of the Kingston community in which he was found.

“We felt like he must belong to one of the neighbors out there, but deputies went around and asked and no one claimed him,’ she said.

Those who want to contribute to help pay King’s medical bills at Southside Veterinary Clinic are urged to do so.

“They are always there for any of these rescues we bring in,” Ewing said. “He’s a pretty little dog and I think we already have someone interested in adopting him.”

She praised the work of the Adams County Sheriff’s deputies.

“We have so many deputies who are awesome with animals. Even though we don’t have animal control in the county or a budget for animals, our deputies always respond and help in any way they can. They are awesome,” she said.